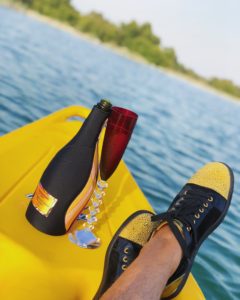 There were a few raised eyebrows when the Sybaritic Single announced he was going to a ‎luxury eco-hotel. Sustainable tourism was not his thing and paying premium for not having his ‎bed sheets changed was not his thing. Yet he had a weekend in ‎Abu Dhabi and, left with scarce choice in the middle of summer, checked in to Anantara Eastern ‎Mangroves.‎

The summer of 2018 proved to be exceptionally hot for hoteliers both in Abu Dhabi and Dubai. As ‎supply continued to increase while demand weakened, Four Seasons, St. Regis and a many other ‎top hotels are barely touching the USD 150 mark per night. Coupled with the ‎American Express Centurion benefits (such as USD 300 credit at St. Regis with breakfast, ‎upgrades and lots of other frills included), these hotels are essentially at a loss.

The main, if not the only, reason to stay at the Anantara is the Mangrove National Park. Despite the blistering heat, the Sybaritic Single enjoyed kayaking into the wilderness at sunset, carrying his ‎own Champagne set. He did so on his own rather than with a guide – and perhaps that was why he couldn’t spot any of the fauna, which was said to include herons, foxes, turtles and ‎sea snakes. The service at the hotel was flawless, however was there anything else to do apart from admiring the swamps?

It was when the Sybaritic Single was delighted to learn about the hotel’s ‎partnership with the Saadiyat Beach Club – an exceptional seaside wellness facility 20 minutes ‎away. Previously known as the Monte-Carlo Beach Club Saadiyat, it was ‎inaugurated and operated by Société des Bains de Mer until 2014 – the first facility of its kind ‎outside of Monaco. The 9km stretch of beach has been certified with the Blue Flag eco-label ‎since 2013, with the management taking serious care of preserving the natural beauty of the ‎place.‎

It was this partnership that added an exciting eco-twist to the weekend: it made it fun and so diverse. It also surely delivered sound ‎commercial returns to both the Anantara and the beach club, and the Sybaritic Single only ‎wished that more luxury hotels in the Middle East followed suit and came up with creative ways to ‎stimulate business during summer.