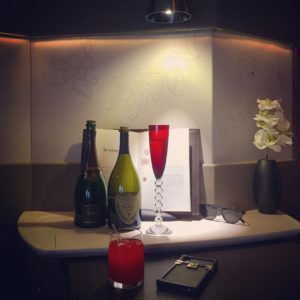 There are rumours that the Sybaritic Single spends more nights in the air than he does at luxury hotels. Sometimes this can actually be true and it’s the reason why he carefully chooses the most comfortable of cabins.He recently flew aboard the new Singapore Airlines A380 with the most spacious configuration among all super-jumbo operators: in the space where Emirates squeezes 14 first class suites and Etihad Airways manages nine “apartments”, SIA has just six very spacious suites, measuring 50 sq.f. each. When travelling with a partner, two suites double as one, with a proper free-standing king-size bed in addition to two swivelling armchairs – the Sybaritic Single has been missing those since the American Airline intercontinental first class days. There is no additional social lounge on-board, however the Sybaritic Single never wanted to leave his suite, having enough room to stand up and walk around within his own private space. Two large television screens plus a touch screen panel ensured he never got bored. The biggest digital luxury, however, was the super-fast Wi-Fi connection which allowed him to talk face-to-face with his family in Moscow for a good hour. Not many luxury hotels on the ground can boast such incredibly fast and reliable connectivity.Eva Tang, one of the most stylish Singapore Girls he has ever seen, took exceptional care of the Sybaritic Single during the flight, refreshing Krug 2004 in his red crystal flûte before he remembered.SIA has certainly delivered the most luxurious commercial aviation real estate in the air, coupled with its already impeccable service. Once already at Changi, the Sybaritic Single passed by the SIA’s Private Room for an chrysanthemum tea and, feeling refreshed and admiring, continued to his next luxury hotel.