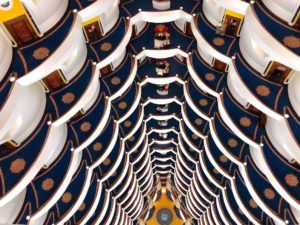 Burj Al Arab inside (outside is shown above)

After the very generous caviar tasting in the skies between Zürich and Dubai, accompanied by two or three of bottles of Laurent-Perrier Grand Siècle, the Sybaritic Single decided it was the time for a few healthier days. However, he felt that a meager diet of green teas and juices was not enough and made his way to Jumeirah’s Burj Al Arab, the self-proclaimed world’s most luxurious hotel, for a proper spa add-on.

While the “seven-star” facility still looked exactly the same as it did when the hotel opened in 1999 (and therefore got terribly aged by now), it did develop a wonderful retro patina which barely any other hotel in Dubai could boast. It was only very few things that had changed. The splendid whirlpool got unsightly fenced due to some ridiculous safety regulations and there seemed to be even more bored-to-death lifeguards around the shallow infinity pool (0.9 metres), whose main job seemed to be pressing the button to restart the hydro-massage every few minutes. And, of course, using the spa relaxation area as a venue to serve corporate iftars (sunset meal breaking the fast during the Holy Month of Ramadan) was not the brightest idea since the Sybaritic Single had no other place to enjoy his own sparkling refreshment. Left with little choice, he decided to kill some time in the gym.
After an hour on the latest Technogym treadmill, his thighs were lancing with agony, breath coming in ragged gasps – and he was finally ready for that spa remedy he loved the hotel for. The excellent hands of the masseur made all the difference for the Sybaritic Single, who was pummelled and prodded, rolled and wrapped like a giant California roll.
In the end, he felt one kilo lighter and a few years younger – and that great feeling lasted for a few days after. The skillful and courteous therapists of this luxury hotel shine brighter than any of the gaudy Hermès toiletries and they are the main reason why the Sybaritic Single comes back to Burj Al Arab again and again before his next all-singing, all-dancing world tour.