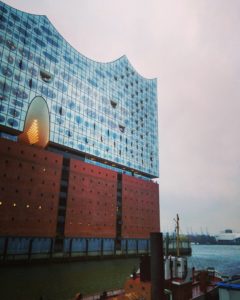 Earlier this week, the Sybaritic Single’s travels took him to Hamburg and the year-old Westin Hamburg. It is part of the landmark Elbphilharmonie complex which in less than a year since opening has become Germany’s most popular attraction, ahead of Neuschwanstein Castle.

The redevelopment of an old warehouse, originally built in 1963, commenced in 2007 and was estimated at EUR 241 million. The plan was to erect a glass construction on top of the warehouse, which would resemble a hoisted sail, water wave or quartz crystal and would house a 2,100-seat philharmonic hall, a 244-key luxury hotel and 45 residences. After a number of delays and sharp criticism, it was eventually inaugurated a decade later and the final bill reached EUR 870 million.

The Westin Hamburg occupies floors six to 20 and is a brilliant example of how new-age hotels can integrate into the history and cultural life of a destination. Thanks to the uniquely curved panoramic windows, which must cost a fortune due to their über-complicated and long production process that commences in Germany, continues Italy and then each glass is finished in Germany again, every room offers a unique and ever-changing view. Colour is largely absent and instead comes from the light reflected by the Elbe which pours through the fritted windows and projects a range of hues on the white walls, most striking at sunrise and sunset. Everything in the hotel links the city’s maritime past and future with ease and elegance: from the animated steamer on a giant plasma screen in the lobby to the Queen Mary 2 mooring into its docks a few metres away.
The Sybaritic Single also appreciated the flawless service throughout. He discovered that The Bridge Bar on the eighth floor plaza level starts pouring Champagne from 8:00 AM and is also a much better alternative to the main restaurant with its prosecco. It also offers vastly superior views which one can enjoy all day long.
Staying at a luxury landmark has never been so easy. Karl Lagerfeld, a Hamburg native, agrees as he prepares to present the next Chanel Métiers d’Art collection there on December 6th, 2017 (last year was at The Ritz Paris).