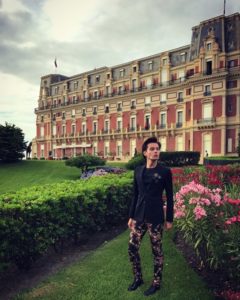 The Sybaritic Single admires French luxury hotels hotels which carry the Palace distinction. Established by the French Minister of Tourism in 2010, the distinction is awarded to the finest five-star hotels. In theory, they must have exceptional qualities that embody French standards of excellence and contribute to enhancing the image of France throughout the world. To date, there are only 16 palaces across the country with half being in the capital.

Having visited all the eight Parisian establishments, the Sybaritic Single headed to Biarritz for a week at the real palace which was originally built for the Empress Eugénie by Napoleon III in 1855 and now boasts 154 keys. He took residence in a suite and prepared to soak in the luxury of the Second Empire.
However, the illusion of being a royalty disappeared sooner than ever as, surprisingly, the palace truly lacked any attention to detail and seemed to impose its own internal rules on its residents. The old-school key had a piece of paper glued to it to indicate the room number. The suite lacked fresh flowers (except one small gerbera daisy in the bathroom which probably was there to pay tribute to all the beheaded French royalty), any sort of welcome amenities or even a greeting card. The WiFi would only work in the furthest corner of the spacious bathroom. What a stark contrast with the other 15 palace hotels!
Each morning, the Sybaritic Single would wish to start his day with a swim. Sadly, this hotel’s iconic swimming pool on the Atlantic shore would not open until 10 o’clock – and 20 minutes later all of the 21 sun beds (for 124 rooms and 30 suites) would be taken, most often by books and hats. Strict timings would also apply for dining, with lunch concluded by 14:00 sharp.
On the third evening, the Sybaritic Single received a call from the concierge asking him to be quieter in his suite, and it was still long before midnight. Was this bedtime according to the palace’s schedule? Unwilling to follow prescribed timings any longer, the Sybaritic Single packed his trunk and his red crystal champagne flûte, and departed for the next luxury hotel. After all, who notes, in happiness, how time is flying?