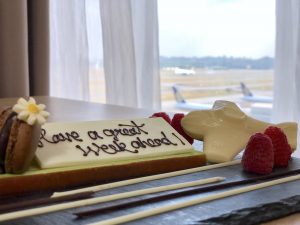 Something odd happened in Singapore. The Sybaritic Single always wanted to stay at Crowne Plaza Changi Airport: a sleek place to spend a night before or after a flight but by no means a luxury hotel. Or so he thought.
The first revelation happened days prior to arrival, when Bruno Cristol, General Manager, cared enough to send a properly personalised e-mail to confirm flight details. Once in Singapore, the Sybaritic Single was greeted at the airbridge and whisked through all arrival formalities straight into his room by a welcome committee of three – the entire process took less than 10 minutes. Prompt in-room check-in, baggage delivered the same moment, delicious breakfast surprise waiting by the bed. Most luxury hotels can’t afford such precision of smooth and thoughtful service.
Over the next 24 hours, the Sybaritic Single enjoyed panoramic views of Changi runways with more than 1,000 daily take-offs and landings – metres away from the action yet in complete sound-proof haven.
The hotel is also an oasis of wellness with its all-vegan spa, 24/7 gym and a tropical swimming-pool at the heart of the original WOHA-designed building. Curiously, the new 243-room extension, also by WOHA, was added in 2016 within the record-breaking 26 (!) days.
Admittedly, the hotel did lack butler service and the Sybaritic Single didn’t have a chance to speak to the concierge. Instead, everything was facilitated by Raymond Lomboy, an absolute guest service guru who was also in charge of the Club Lounge and seemed to be on duty 24 hours a day. From arranging Champagne à la minute and tracking flights in real time to personally escorting the Sybaritic Single through the maze of Changi on departure – he was always there, miraculously, to make it all absolutely seamless.
Despite being a decade old, the hotel is a divine place to stay whenever at Changi, and its service, impressively, eclipses many established luxury hotels in the city. No wonder it was voted the World’s Best Airport Hotel by Skytrax for five consecutive years.