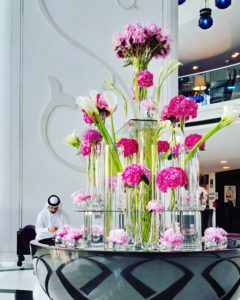 Subtle details always catch the Sybaritic Single’s attention. From the moment of arrival at a luxury hotel, the floral arrangement in the foyer tells more than any brochure – and does it faster than any social media.  The famous bouquet in the lobby of Hôtel de Paris in Monte-Carlo, above, can even be considered a barometer of the global economy. In the best years, it blooms richly with stunning orchids, white camellias and exotic flowers flown in from all over the world. During the recession, it massively loses in volume, its orchids replaced by thorns and some occasional brushwood. Over the last couple of years, the bouquet has been suffering together with the fluctuating exchange rates of the euro and the Russian rouble – this was noticed by many, who nevertheless remember that the best spot for taking photographs is the rear side of the floral composition (the light is better there). Great hoteliers’ spirit and hospitality get reflected in florals. Imagine Four Seasons George V losing its flowers – by now, they have evolved into a true Parisian landmark where 12,000 flowers are delivered each week to be choreographed into the most stunning creations by Jeff Leatham. As the hotel’s General Manager, José Silva, joins Jumeirah as its new CEO in March, could we hope that Burj Al Arab, the brand’s flagship hotel in Dubai, will once again boast the finest florals? The Sybaritic Single remembers that a decade ago, in the heyday of the world’s most luxurious hotel and before any economic downturn, fresh roses were considered the simplest flowers to be afforded.