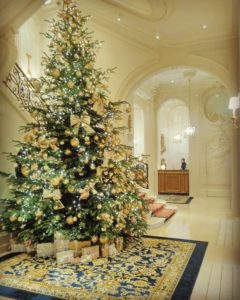 The Sybaritic Single agrees with Karl Lagerfeld who says: “I hate Christmas Day. It’s for children and families. Not for people like me.” Every year, Christmas festivities seem to take-off earlier than ever before and this year many luxury hotels engaged in the Christmas race way too early – it was not even winter!

Of course, there is always Claridge’s opening the season and impressing the world with its glitziest Christmas tree, this time dressed by Karl Lagerfeld (Apple, Dolce & Gabbana and Burberry are past collaborators). Across the Atlantic, Swissôtel Chicago went further and turned its entire 600 sq.m. presidential suite into an extravagant holiday spectacle with over-the-top decorations and as many as a dozen Christmas trees. However, some might argue that 12 trees is, in fact, quite modest compared to the White House where Melania Trump received a total of 53 Christmas trees last week.

A couple of days ago, the Sybaritic Single admired the famous Christmas tree at The Ritz Paris, timelessly dressed in gold, while sipping Champagne at Bar Vendôme. That morning, he chose blanc de blancs to match the baubles and sparkle of the tree. Later that morning, after a quick rendezvous at Dior on Avenue Montaigne, he raised another flûte at The Peninsula Paris, where its terrace had been transformed into a very luxe Christmas bazaar. The place is very cleverly arranged with life-size bears by Steiff and an array of luxury retail. All boxes under the Christmas trees are Baccarat and the Sybaritic Single even had a chance to replace his own red crystal flûte, if needed, at one of the pop-up festive chalets.

Today he is already in Dubai, just off the inaugural new first class service on Emirates (more on it in two weeks) where winter festivities are in full swing despite the glaring sun and the heat. This time it is certainly less grotesque than in 2013 when the lawns surrounding Burj Al Arab Jumeirah got covered with real snow, complete with a Champagne ice bar and an army of snowmen lined up as early as October 29th, but the world’s most ostentatious hotel always seeks ways to WOW its guests.

And as soon as Christmas and New Year are over, there will be Russian Christmas, Chinese New Year, St. Valentine’s and then Easter already. It almost feels like enjoying an ordinary day at any luxury hotel, without some gaudy celebration or a special menu, is the new luxury.