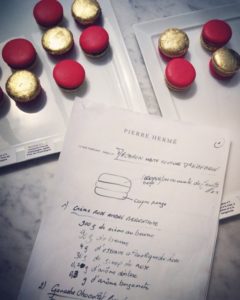 Sybaritic Single is hard to impress. He appreciates the luxuries of hotels but after staying at so many of them, his eye will notice a flaw sooner than perfection.Recently in Dubai, he drove up to Sofitel Downtown and as the valet opened the door of his sports car, he was instantly greeted by name. A butler was also there to assist with the jacket and escort to the foyer, where another member of the team was already expecting him with a three-strong entourage.“Too immaculate for a casual arrival”, thought the Sybaritic Single as he refreshed himself with rose water and a cold towel, presented with utmost elegance.The main surprise, however, came moments later. The Sybaritic Single was seated in the lobby lounge with bubbles and his favourite tea already waiting when suddenly a plate of his own macarons was served, thousands of miles away from where they are normally produced. The secret recipe of those gold-covered macarons includes a particular marc de champagne, dried raspberries, an amber perfume – and the recipe is kept in the 17th arrondissement in Paris, at Maison Pierre Hermé.Incredibly, the Sofitel team decided to go above and beyond in their quest to exceed expectations. In advance of the arrival, chef Cédric d’Ambrosio contacted the team in Paris for the secret recipe of the unique macaron named after the Sybaritic Single. Apparently, it took him and his team in Dubai several days to recreate this one-of-a-kind recipe and the jewel-like appearance of the macaron, however they got it right and in the most effortless manner, or so it seemed.

Could this be the most memorable and personal luxury hotel welcome? Coupled with the spectacle of the evening candle ritual which is performed at sunset at every Sofitel around the world, it was certainly one of the most dramatic.