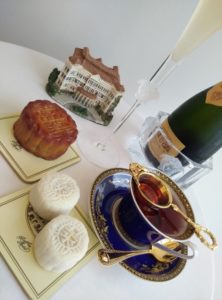 Mooncakes and other essentials at Raffles

The Sybaritic Single celebrates luxury hotels which create their own traditions – or  local holidays with a twist. One of his favourite celebrations is the mid-autumn festival which takes place from July to September at Raffles Singapore. The Grand Dame of Southeast Asia does not need further introductions. Her glorious past paved the way for a plethora of reasons for travellers to return to the hotel, apart from the obvious colonial verandahs and intoxicating Singapore Slings.

Last week, the Sybaritic Single returned to Singapore to pick up a few boxes of his favourite snowskin mooncakes. The flavours he chose varied from the timeless mother-of-pearl and macadamia nuts with salted duck eggs to the more innovative Champagne and Cognac. Of course, he wished he could taste all eight flavours available, but he reminded himself that each mooncake was known to be a thousand calories rich. To balance the sweetness of the white lotus paste and the ganache, the Sybaritic Single picked up a pack of the bright red Singapore Sling tea blend – the latest innovation and an instant best-seller at the hotel’s boutique.
It has become an annual tradition for Raffles to set up a large store for the mooncakes within its retail arcade as well as an online shop. Each time the Sybaritic Single passed by the pop-up store, there was a line of shoppers, both locals and global travellers, all of whom were getting the signature turquoise boxes of mooncakes. In the meanwhile, the hotel’s butlers were seen hurrying through the lobby with turquoise tote bags filled with the delicacy – for in-house gourmets to carry home as souvenirs. It seemed like the entire place had suddenly become obsessed with the handcrafted pastry. More than 100,000 mooncakes are sold by the hotel each year – and despite the impressive number, they are always sold out even before the arrival of the actual festival. What a success for the luxury hotel and its culinary team, what great fun for the guests – mooncakes could as well be the new Singapore Sling.
Many luxury hotels offer artisan chocolates or pastries, but a few execute it as well as the Raffles Singapore. Here, it has evolved into a highly profitable formula of ancient traditions, innovative culinary approach and clever marketing. With every mooncake, the hotel sells a story, a memory – and, ideally, a reason for another stay.