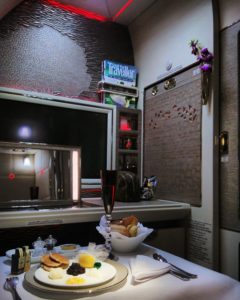 Apart from the art of building Champagne pyramids, the Sybaritic Single inherited from his globe-trotting grandmother another passion: travelling onboard inaugural flights. Unlike her, he can never fly the world’s first commercial supersonic flight again, however he made every effort to be in suite 1A of the newest Emirates first class which flew on 1 December 2017. The now fully enclosed suite, with walls from floor to ceiling, individual temperature controlled AC and old-fashioned curtains to complement the window shades is the closest that commercial flying can get to the world of luxury hotels.
The idea of the Sybaritic Single inspired Emirates, it seems. The airline built its new “game changer” first class suite as it is designed to celebrate absolute solitude in the sky. Travelling couples can never dine together, hold hands at take-off, have eye-contact or even sit close to each other. Instead, each one is nested in a jewel-box-like space.
After the most appallingly managed boarding at Brussels, the Sybaritic Single walked into his 4 sq.m. private space and immediately closed the sliding door behind. The suite felt tight yet well-designed by Jacques Pierre Jean who is more known for his yachts and private jets. The Sybaritic Single always appreciates having a full-length mirror in hotel suites and therefore he loved that the wardrobe door in the new onboard suite had exactly the same. Another element of the suite that impressed him was the carpet that felt almost too soft. It even had fibre-optic lights in it. Illuminated glass cupboards with refreshments on both sides of the large 32” screen replaced the minibar, and the vaulted ceiling of the private suite was crowned with a 20-light chandelier, remotely controlled.
There was still no separate bed like on Singapore Airlines so the seat had to be converted into one in an old-school manner. While the bedding was newly designed, it was far from perfect: the very thin mattress barely covered the seat and just one large pillow is never enough for a comfortable sleep. The Sybaritic Single mused of Air France with its Sofitel MyBed in first class and the new United business class with as many as three pillows by Saks Fifth Avenue (yes, even US carriers can get it right sometimes).
Things went wrong where they normally go wrong even at the most beautiful luxury hotels. Service was patchy all around with stewardesses visibly uncomfortable with the latest cabin design. To preserve the privacy of the suites, most of the service is now offered through a so-called “service window” which opens whenever required and a hand places a magazine, a cup of tea, a glass of Champagne or a plate of canapés straight on the table. A slight prison-like sensation in the sky. Those missing proper eye-contact and small talk with the crew are encouraged to make use of the video call function by pressing the “room service” button on the control panel. As the Sybaritic Single is less than enthusiastic about video calls in his daily life, he therefore skipped the option.
Even more eyebrow-raising was the inaugural service running out of Dom Pérignon 2006 two hours into the flight – and that was probably the only time when the Sybaritic Single had a proper face-to-face interaction with the purser who summoned with a bottle of the less premium Veuve Clicquot from another cabin. Interestingly, that was the Sybaritic Single’s second flight in a month when Emirates ran out of Champagne onboard.
Upon arrival at Dubai, the Sybaritic Single once again appreciated the convenience of being able to put on his Dior suit in absolute privacy in front of the full-length mirror in his suite, the door and service window firmly closed. The six first class passengers were taken by bus to the terminal where all of them disappeared in the crowd. There were no certificates, cards, personal thanks from the crew or any other form of recognition of being the first to fly the new “game changer” first class, as described by the airline in its latest campaign. Just a routine arrival at one of the furthest remote stands. In luxury, personal attention is essential and the Sybaritic Single often keeps welcome cards (handwritten rather than pre-printed) as mementos of his travels – this is something Cathay Pacific understands very well with cabin crews presenting personally signed cards to all high flyers.
As for the privacy, the Sybaritic Single still doubts that he enjoyed being confined in such a small space for long as he did miss the grand atmosphere of spacious and airy first class cabins. After all, he is more used to spacious luxury hotel suites rather than flying jewel boxes, even if they come with 10 different mood light options.