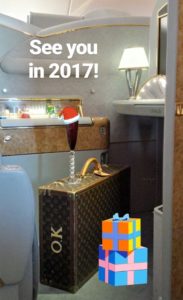 The New Year has finally checked-in and the Sybaritic Single is ready with his 2017 global itinerary. He will soon check-out from his country house outside Moscow and dive back into the world of luxury hotels. There is a number of exciting openings and re-openings taking place this year and they have naturally shaped his choice of destinations.

Later this month, the Sybaritic Single will traditionally head for the Paris Fashion Week, staying at Hôtel Plaza Athénée with its fully refreshed Dior Institut. He is then seriously considering continuing on to Shanghai (sadly, the most anticipated Aman Shanghai might not be open in time) before returning to the fascinating Pyongyang for the Lunar New Year celebration. The North Korean most iconic tower, under construction since 1987, the 105-storey Ryugyong Hotel had lights inside its top-floor suites last month so there is hope that the hotel might finally be opening. It might not be managed by Kempinski any longer but this hotel opening is one of the most exciting in 2017.

In February, the Sybaritic Single’s birthday celebration will once again take him to Hotel de Paris in Monte Carlo. After three years of refurbishment, the luxury palace is almost ready – and he is definitely looking forward to long dinners at the reimagined Le Louis XV by Alain Ducasse.

April is all about Hotel Eden re-opening its doors in Rome – and what a wonderful month to be back in the eternal city! The Sybaritic Single might also happen to be in London for a few days where he will make sure to pay a visit to Four Seasons Ten Trinity, one of the most anticipated luxury additions in the British capital.

In May, he will be back in Moscow for a long weekend between his home and Barvikha Hotel & Spa, detoxing at its Spa Espace Vitalité Chenot. It might not be brand new however it is definitely a must-return to for any wellness aficionado. From there, he will transfer to Grand Hotel Stockholm (again, the hotel might not be new but Singapore Airlines are launching a direct Moscow – Stockholm flight in June 2017 using their latest A350 which is a must-fly). Adare Manor in Limerick is on the luxury map as well as it is due to re-open after a major refurbishment as Ireland’s premiere luxury establishment.

There is no another round-the-world trip planned for summer, but rather visits to the old favourites: a few days at Hôtel du Palais Biarritz followed by a Faena Miami Beach Hotel (Alan Faena is always ready to impress with something new and exciting anytime, anywhere) and onwards to the West Coast for one of the most anticipated grand openings, Waldorf Astoria Beverly Hills, directed by an old friend and one of the top luxury hoteliers of our generation, Luc Delafosse.

New York is on the map for September – aboard the Etihad A380 Residence for another weekend at the Baccarat Hotel and a temperature-check at the Four Seasons New York, the latter post-refurbishment.

In October-November, the Sybaritic Single plans a nostalgic weekend at the old-look Raffles Hotel Singapore before it closes for a few months of full refurbishment. From there, he will continue to Aman Beijing for a couple of days at the Summer Palace to enjoy the season once the summer heat is gone. This is not a brand-new Aman, but the Sybaritic Single has always saved it for a special occasion.

Other exciting luxury hotel openings which he watches closely are the Oetker Palacio Tangara in Sao Paulo, The Old Silo in Cape Town, Bulgari Hotel in Dubai and Hôtel de Crillon in Paris. This luxury quartet could become excellent impromptu weekend getaways in-between his other trips in 2017.