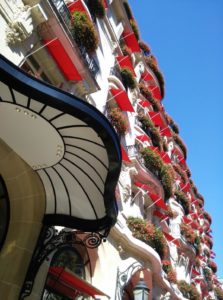 The Sybaritic Single firmly believes that every era gets what it deserves, and that luxury hotels and politics exist in completely different dimensions. Communism or capitalism, economic boom or depression, Karl Lagerfeld or Karl Marx – whatever the times are, the finest establishments never fail to attract the most glamorous crowd.

Of course, there were many occasions when hotels become centre stage for headline political events such as The Adlon during World War II or, not long ago, The Ritz-Carlton Riyadh which was converted into a lavish prison for high-profile Saudis. However, regardless of the regime, luxury hotels are most often havens of peace in the middle of endless political turmoil.
Most recently Sir Elton John, Bobby Berk and George Clooney urged a boycott of the Dorchester Collection, owned by the Brunei sovereign wealth fund, over the new adultery and anti-gay laws that made homosexual sex punishable by death by stoning. They listed nine venues to avoid, including London’s Dorchester along with the Hotel Bel-Air and the Beverly Hills Hotel in Los Angeles.
As the Sybaritic Single prepares to travel to Paris next weekend – to collect his new summer look by Dior – he looks up nightly rates at his favourite Hôtel Plaza Athénée (one of the nine affected hotels) just to discover that they have actually gone sharply up. Touché. It seems like the world of luxury has once again proven its immunity against politics and à la minute media hype. Unlike pop hits and drama series, luxury hotels may change hands but they never go out of fashion – and with everything that ever happens in their suites, they definitely know better than many how to keep their guests’ secrets.