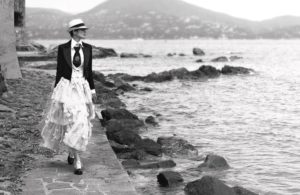 The Sybaritic Single always wondered, why luxury hotels remain so less than inspiring when it comes advertising? High quality brand campaigns are rare, and once released, they often come with too much aplomb and fanfare – but are they really worth it? Why do luxury hotels’ ads struggle to keep up with the level of refinement found in luxury retail?

Mandarin Oriental has been running its successful “Fan Campaign” for more than 18 years now and it still remains a timeless, clever synergy between the brand, celebrity patrons, destinations and CSR. One&Only expressed itself in a sophisticated brand campaign starring supermodel Christy Turlington – but while its black-and-white visuals ooze refinement they mostly appeal to those already familiar with the brand which makes the campaign less impactful.
Year after year, Four Seasons  and The Ritz-Carlton continue with a very conservative, almost template, approach which communicates the message with a newswire precision yet lacks any creativity. In the past, Raffles became famous for elegant multi-generational campaigns, visually rich and emotional (yet this was all toned down once the brand got absorbed into the Accor luxury portfolio and is yet to rediscover its voice).
Rosewood’s advertising is the latest scandal, inspired by the re-opening of Hôtel de Crillon. It follows in the footsteps of The Cosmopolitan’s “The Right Amount of Wrong” with the “wrong” being trumped much further. Its creators must still be living in the age of kitsch, porno chic and drugged models, but those attributes of the late 1990s are barely inspiring two decades later. “Luxury is the opposite of vulgarity”, as Gabrielle Chanel used to say.
The Sybaritic Single wishes that more hoteliers focus on refreshing their brand communications – and muses of more sublime and intelligent approaches. Should luxury hotels headhunt marketing gurus straight from LVMH (see Louis Vuitton, working with Jeff Koons, above) or Richemont?