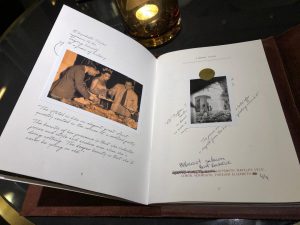 It has been a few weeks since the Sybaritic Single stayed at Raffles Hotel Singapore on the day of its re-opening after the USD 200 million renovation, and he kept his promise to be back at one of his favourite hotels before too long. The dust has certainly settled after the turbulent come back in August, staff have calmed down a bit and the AC seemed to work properly in the lobby – safe for the hair.

Having enjoyed a Singapore Sling at Long Bar for breakfast, the Sybaritic Single headed to the new-look Writers Bar to enjoy its exquisite boutique feel and some daring mixology creations. Unlike the ever-busy and more famous Long Bar, this venue celebrates the very special grace of Raffles that is intimacy and a sense of quiet and of privacy. Being that “gentleman in the corner” enjoying the smell of frangipani, the Sybaritic Single studied the intricate cocktail menu which looked like a leather-bound travelogue by Pico Iyer, a Britain-born American globe-trotter also known as the greatest travel writer of our times, and the hotel’s first official writer-in-residence. Some of the drinks were inspired by locations in Singapore visited by the author. Others, by feelings had or memories made. There may be nothing more hipster than enjoying one of the 10 cocktails engendered from fictional moments.

The Sybaritic Single first chose the lightest one called ‘Eternal Youth’. Inspired by Elizabeth Taylor (who loved Raffles), it was a craft mix of Billecart Salmon Brut Reserve, Sipsmith ‘Raffles 1915’, lemon, vermouth, finished with a few spritzes of ‘Forever Elizabeth’ perfume right at the table. Very dramatic and delicious – the Sybaritic Single ordered three or four of those.
Just before the Liz Taylor’s intoxicating floral fragrance would overtake his own Dior perfume, he decided to finish the night with a slightly darker and intense creation called ‘Marginal Gains’ which came with no perfume sprayed over it but with a vintage postcard to keep as a memento of the night.
Oh, how much fun the new Writers Bar is! Definitely worth flying back for – and a great example for other luxury hotels which struggle to create a drinking den with a strong identity.