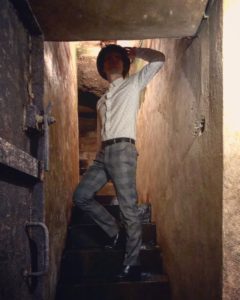 Having travelled to more than 80 countries and stayed at hundreds of luxury hotels, the Sybaritic ‎Single is hard to impress. His perfect hotel would pleasantly surprise, create memories and offer ‎a highly personalised service – in addition to being impeccable on the real estate side. ‎In Vietnam, his latest discovery, the Sofitel Legend Metropole Hanoi, has ticked all the usual boxes and exceeded ‎all possible expectations of the travel connoisseur. So unexpected, so stylish and so WOW!

It all began at Hanoi airport where Dao Dinh Quan, his majordome for the next two days and with more than a decade working at the hotel under his belt, personally ‎welcomed him and his friends with flowers and was on hand to pop open a chilled bottle of ‎Deutz Champagne as the gleaming limousine was leaving the airport – naturally, served with his ‎favourite raspberry macarons. How did he guess the Sybaritic Single’s taste? Well, the hotel ‎must have done its homework, perhaps through social media.‎ 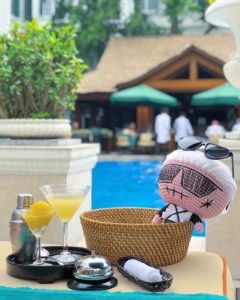 Upon reaching the grande dame of Hanoi, the absolutely over-the-top welcome committee ‎was led by William J. Haandrikman, AccorHotel’s Area General Manager North Vietnam – his ‎team whisked the Sybaritic Single and his wooden trunk straight to suite 125, the only suite ‎with its own private garden in the historic wing of the building. Instant in-room check-in took place ‎while the impressed Sybaritic Single was presented with yet another bottle of Deutz along with a Versailles-scale feast which included fresh ‎raspberries, several plates of chocolates, macarons, one chest of fresh fruit plus another filled with dried fruit, and ‎even a vanilla mousse cake with his most recent photograph on it. Presumably, that picture was ‎taken from the Sybaritic Single’s Instagram – he had posted it just a few hours ago while in-flight ‎to Vietnam. Another photograph – from the airport lounge – was printed and placed inside a ‎wooden frame.‎ Somebody must had spent a sleepless night anticipating the arrival.

A few days earlier, the Sybaritic Single requested four traditional Vietnamese hats, a couple of ‎restaurant reservations and a breakfast to be served in his suite – and every smallest detail was ‎executed to the highest levels of excellence. The evening he went to a local jazz club, and a hotel ‎employee escorted him personally through the ever busy streets of Hanoi.

Later in the night – a warm bath with rose petals, chocolate dipped strawberries and a flûte of Champagne were waiting, without asking. Its temperature was just right, as if someone invisible was timing his late return to the hotel – and that invisible “someone” was the true wonder of this hotel. Nobody did ever spell out to the Sybaritic Single that “We noticed that you enjoy your Champagne with raspberries” – yet it was all anticipated, planned, arranged. Discretion was the name of the luxury game.

When the Sybaritic ‎Single wanted to stream some of his own tunes the following morning, he was ‎happy to discover an easy-to-use Apple TV complemented by a powerful Bang & Olufsen sound system. That ‎was a great example of well-thought in-room technology (for a hotel that is 117 years old) which was both modern and ‎fit for purpose yet did not require an IT guru at hand to operate.‎

As the Sybaritic Single explored the property with the resident historian, he was ‎glad to find himself among every possible head of state, from Ho Chi Minh to Vladimir Putin, and Hollywood celebrity, from Charlie Chaplin to Angelina Jolie – and even Sidney Toledano of Christian Dior – who had stayed ‎at the Metropole Hanoi since its opening in 1901. The sprawling underground bomb shelter below the ‎hotel’s Bamboo Bar left a great impression as its cement walls evoked memories of the Second Indochina ‎War and created a surreal contrast with the calm modern luxury a few metres above.‎

While settling his bill, the Sybaritic Single was so delighted with his stay that he even asked to include one more bottle of ‎Champagne to his folio and serve it in the car to the airport, always prepared to spend so much more at the hotels which truly care.

‎“It’s already waiting for you in the limousine”, was the immediate response.‎

Indeed, another bottle of Deutz on ice, another plate of fresh raspberries and at least two dozen ‎macarons were waiting in the car – every single detail to his personal linking – as he was chauffeured away through the pouring rain, wearing a Vietnamese hat and with his red Baccarat crystal flûte in hand.‎

Could the Metropole Hanoi top the Sybaritic Single’s list of favourite hotels? It certainly might, as it ticked all ‎the usual boxes so effortlessly while joggling the ephemeral elements of surprise, unique ‎memories and next-level personal service so astonishingly well.‎ That weekend was a true definition of luxury.