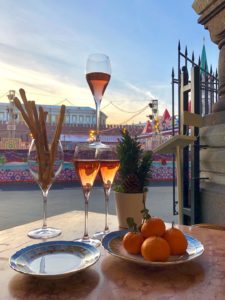 Moscow has always been dear to the Sybaritic Single. Earlier this month he had a night to spare – and he chose to do so at a luxury hotel located not far from the Kremlin.
Initially built in 1898 and later transformed into Russia’s first luxury hotel in 1992, it was the first branded property to open in the capital after the demise of the Soviet Union. To the Sybaritic Single, who was then only nine years old, the hotel seemed to be the epitome of glamour. Politicians and celebrities flocked to the grand building on the banks of the Moskva River. Its lobby lounge became both famous and infamous for the most audacious multi-million deals of the last decade of the 20th century. Anna Chapman, George Soros, Diana Ross, Luciano Pavarotti, Monica Belucci and many others stayed at the hotel admiring its stunning views and soaking up the fascinating atmosphere.
What came as a surprise today was the service: it almost felt like a time-warp straight back into the glorious communist times. Having received a pre-printed welcome card signed by the generic “Guest Services”, the Sybaritic Single felt he was closely watched with distrust at every corner. Having tasted the Russian Champagne at breakfast, he decided to order a few glasses of Ruinart Blanc de Blancs instead to complement his blini and caviar – and he kept receiving a separate bill to sign after each flûte. He also got woken up in the middle of the night by an odd call with the voice at the other end asking: “Who are you?” Puzzled by the situation, he decided to sweeten the dark winter night by something from the minibar – only to discover that it was properly locked up, as if the hotel was too afraid that a bar of chocolate would go missing.
Staying at this luxury hotel certainly brought back memories of perestroika – a unique cultural experience which can only be good once-in-a-lifetime.