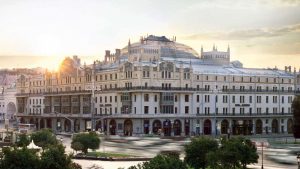 “If a man does not master his circumstances then he is bound to be mastered by them,” wrote Amor Towles in his  2016 Gentleman in Moscow bestseller.

The Sybaritic Single finds it absolutely appalling that so many luxury hotels simply shut down during these trying times – was that not the easiest thing they could possibly do? Some establishments have been creative with delivering room service to local residents and taking care of their laundry, while only a few other hotels have been truly honest in their claim that “we’re in this together”.
While normally the Sybaritic Single would avoid The Metropol* in Moscow (its last major renovation took place almost three decades ago and it certainly feels so), he praises the grand dame of all Russian hotels for staying true to its century-old promise of a luxury haven, even if slightly shabby. Located right in the centre of the golden triangle, between the Kremlin, Bolshoi Theatre (shown above) and the luxury boutiques of Tretyakovsky Proyezd, it invites to enjoy self-isolation in style, with its rooms and suites rearranged into ephemeral apartments. All amenities have been upgraded for a comfortable solace, including en-suite mini-gyms for those who keep fit, all private dining included in the rate and served in the latest contactless fashion. Daily housekeeping has been redesigned to properly sterilise and disinfect each corner of the room, and the concierge is happy to facilitate any additional grocery or medication delivery at any time. And while many rooms offer views of the Bolshoi, at present its performances can only be enjoyed as a live YouTube broadcast – seamlessly, thanks to the latest Wi-Fi upgrade.
A 1905 icon of the Russian Art Nouveau, the Metropol is once again an island of luxury in the middle of this global pandemonium, and it sets a great example of true hospitality regardless of circumstances for many hotels to follow.

(* According to www.moscow-hotels.com, Metropol Hotel is situated in the heart of Moscow, in front of Bolshoi Theatre and in immediate proximity to Red square and Kremlin. The Metropol was founded in 1905 as a part of the grandiose project of the famous businessman and patron of art Savva Mamontov. According to the first Mamontov’s plan, the hotel had to be the part of cultural centre with the largest theatre, exhibition centres, skating rink, and winter garden. Mamontov recruited talented architects and artists — Valkootte, Kekushev, Vrubel.Formerly the plot of building was occupied with Chelyshevsky baths, mentioned in Moscow and Moscowers Gilyarovsky’s book. The building started in 1898 and finished in 1905. But the original plans of Mamontov won’t be realized because he was convicted of financial disturbs and he was arrested. He was acquitted but couldn’t participate in the building. New contractors refused the Mamontov’s ideas and decided to build five-star hotel. However, run of bad luck didn’t stop. In 1901 fire took the new building, destroyed all the interiors. Metropol Hotel was opened just in 1905.

Moscow citizens called this hotel as the tower of Babel, they were amazed with turrets, bas-relieves, glass domes, tracery grates, majolica pictures. Metropol Hotel was equipped with elevators, fridges, ventilation. There were three popular restaurants in the hotel. Brusov, Rakhmaninov, Komissarzhevskaya, Shalyapin visited these restaurants.During the revolution of 1917 Metropol Hotel became one of the counter-revolutionary post. Later it was nationalized and turned into the Second Council House. The main restaurant of Metropol Hotel turned into  conference hall, where Lenin, Trotsky, Sverdlov spoke. Many well-known Bolsheviks — Bukharin, Chicherin, Antonov-Ovseenko lived and worked in Metropol Hotel.)