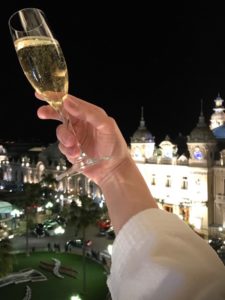 Earlier this week, the Sybaritic Single spent a few days in Monaco which has become his usual February sojourn. The most civilised two kilometres on the planet shine with nine Michelin stars and boast an enviable concentration of luxury hotels complete with splendid dining rooms, from the glamorous Le Louis XV at Hôtel de Paris to the casual Nobu at Fairmont Monte Carlo.

However, Alain Ducasse has once again escaped the fork of the Sybaritic Single. with a promise to re-open in March, Ducasse closed the most Michelin-starred establishment of the principality, Le Louis XV, precisely the day before Sybaritic Single arrived . A box of artisan chocolates from his Parisian manufacture was all the concierge of Hôtel de Paris could arrange in lieu of the celebrated chef himself.
Joël Robuchon followed his colleague’s example when he closed doors of his own restaurant at the nearby Hotel Metropole during the same period. Returning to Nobu for the fifth time definitely not an option and the Sybaritic Single was left with no other choice than to try the trio of international flagships: Buddha Bar, Cipriani and La Marée.
These three establishments stand apart from luxury hotels yet are popular among the jet-set landing in Monte-Carlo at any time of the year. Reservations are essential even in February and being 15 minutes late almost inevitably means that the table is given away to the eager public waiting at the door. The service is less personal while more efficient, with dishes flying-in sooner than expected and wines poured less elegantly than desired. Their menus taste precisely as expected: one would question the scientific approach of seemingly robotic chefs recreating the flavours so identically well in Monaco, Moscow, Dubai or Hong Kong. The consistency feels satisfying to the taste buds yet lacks the authenticity of local gastronomy. Very different in their styles, these international establishments have inevitably evolved into upscale fast-food chains which are more about attracting the crowd and turning tables than well-paced and memorable dining.
Now more than ever, the Sybaritic Single looks forward to the re-opening of Le Louis XV as well as his favourite grill at the top of Hôtel de Paris. Even in uber-sophisticared Grimaldi land, luxury hotel dining still remains his firm favourite. Until then, there is a Fauchon boutique in the shopping gallery of Hotel Metropole with a great champagne cellar. Its finest vintages are best enjoyed on a private balcony overlooking the monumental casino.