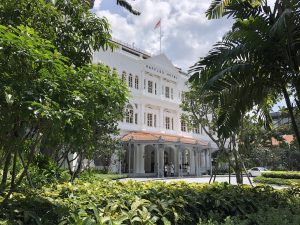 Before Raffles was acquired by Accor in late 2015, Sybaritic Single had held the “Raffles ‎Ambassadors” invitation-only card presented to the most loyal patrons of the luxury hotel. ‎Naturally, he made sure to be the first guest to check-on at his favourite Raffles Singapore after the two-year refurbishment, in the morning of 1 August ‎‎2019.‎
While the 1887 façade remained, the interiors had been changed drastically by Jon Kastl of Champalimaud. The Sybaritic ‎Single could mistake them for The Peninsula Paris: his suite had French style wall panels with ‎modern artworks, reminiscent of a Parisian apartment. It seemed like the only thing that ‎connected it to the original design were the historic floors made of eucalyptus. Controlled ‎by an efficient iPad, the space felt modern, comfortable yet very bland. The precious vintage ‎elements were missing – as were the florals: not a single orchid in any of the rooms.‎ According to sources, the seventeenth-century vases were auctioned off to make room for a “fresher sense of luxury”.
Downstairs, two French chefs – Ann-Sophie Pic and Alain Ducasse – ‎took residence where the iconic Bar & Billiard Room and The Raffles Grill used to be. Having been through the long tasting menu at Le Dame de Pic in the absence of any à la carte ‎options, the Sybaritic Single doubts he would go back willingly – and not only because he prefers to be in charge of composing his own menu. The loud brasserie ambiance and forgettable cuisine fell short of expectations.‎ Thankfully, the attentive maître d’hôtel did propose to change tables once he realised that it got way too casual and noisy in the centre of the dining room.
The rooftop swimming pool was where the Sybaritic Single found solace. Curiously, the French did overlook the wine list selection by the pool: it is only Prosecco when ordered by the glass. In lieu of Champagne, the Sybaritic Single chose a refreshing pot of the fruity Singapore Sling tea which he thoroughly enjoyed. He had the same tea for breakfast, along with the red berry brioche which looked and tasted as if straight from Hôtel Plaza Athénée in Paris.
‎“We had to retrain our butler team to be more about emotional engagement than about ‎transactions. Guests can’t just have a simple hotel stay now.” said Christian Westbeld, the hotel’s ‎General Manager, in his latest interview with The New York Times.
Well, the Sybaritic Single’s ‎stay was definitely the opposite of simple, thanks to the butler whom he had to ask four times to ‎have his suite cleaned, then separately to clear room service plates, and restock the minibar. Not having the option to telephone housekeeping directly is not luxury. He wondered about the reason behind his Butler requesting to specify preferred time for cleaning the room as well as dietary preferences when none of these were taken into consideration eventually.
On the morning of the departure, someone decided to quietly delay his airport transfer by 20 ‎minutes. This was when Sybaritic Single finally lost his temper while waiting in the warm and humid ‎lobby at 5:30 a.m., having just spent an hour doing his hair. Apparently, the hotel had switched off the air conditioner for the night, presumably to save ‎cost. The duty manager even had a miniature ventilator fan on his desk, the kind our grandmothers used to carry.‎
Nevertheless, as an old-school devotee of the hotel, the Sybaritic Single made a promise to return to the hotel in a few months, ‎when everything settles post the grand re-opening. Hopefully, the service gets fine-tuned and guests are ‎once again welcomed with the signature Singapore Sling at this “Raffles white” temple of a flawless luxury tradition.