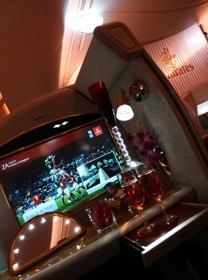 Where to, this time?

The Sybaritic Single celebrates airlines and luxury hotels which maintain style and chic status despite the realm of the modern world, driven as it is by asset management and aircraft utilization. Revenue is vital, but catering to a true luxury traveller is ever more important. ‘Charge me a thousand more, but indulge me in what I truly enjoy’ – declares the Sybaritic Single.

Looking at airlines, most of them have been facing fierce competition from budget and, more recently, mass-market international carriers. This has resulted in thinner profit margins, higher rates of aircraft utilization and eventually less luxuries onboard.

Being a Champagne connoisseur, the Sybaritic Single has been making his recent airline choices based on the label they serve. Of course, Grand Siècle, as on British Airways, has its allure and glamour, yet it calls for caviar, which does not seem to exist in the clouds, today. Dom Pérignon Rosé 2003 has been seen as an unexpected and exquisite addition by Emirates – but why is it exclusively on Asian routes, and not London, Moscow, New York and Paris?

The French have of course, won the battle of Champagne. Dressed in grey and red, Air France‘s latest ‘soaring palace’ cabin boasts a selection many luxury hotels would envy. Instead of banking on one particular label, the pride of the French nation carrier decided to offer the very finest of the sparkling region in season. It updates its in-flight Champagne selection every two months, epitomizing in serving Cristal onboard its flights in December-January. Is this not the luxe?

‘Why do you always choose our airline, is it the French touch that you enjoy?’ – wondered the elegant purser in her Christian Lacroix uniform as the aircraft continued its descent into Dubai.

‘It is the Champagne’ – responded the Sybaritic Single, and asked for another glass.

Many luxury hotels and first-class airlines still have a lot to learn in their battle for luxury travellers, who might as well happen to be making their travel decisions based on the particular Champagne sparkling in their red crystal flutes rather than fare, schedule or frequent flyer schemes. Just because they can afford the luxury of doing so.