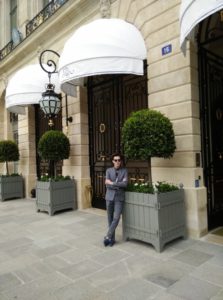 The door is once again open

As planned, the Sybaritic Single was among the very first guests to check-in to The Ritz Paris, on the first day of its re-opening following four years of seemingly endless renovation, which skyrocketed in excess of US$ 450 million. The luxury hotel addict his reservation two years in advance, back in 2014. He knew that the hotel would be fully booked the moment it re-opens, proving wrong all economic assumptions.

With the fire in January and the flood in June, The Ritz Paris could not make a more dramatic return. The Sybaritic Single was welcomed at the aerobridge by a Ritz ambassador the moment he stepped from his flight at CDG on a grey Monday morning and was whisked through formalities into the limousine. Upon arrival at 15, Place Vendôme, he climbed the stairs which so many celebrity guests have ascended. He found his suite looking precisely the same as the last time he stayed in it several years ago. Everything was in its place: the tapestry, the fireplace, the florals, the artworks, the signature amber perfume, the same shades of intense blue, the swan faucets – even the golden ‘Maid’ and ‘Valet’ strings next to the bath tub. Yet, it was all gleaming with a fresh new look, complemented by seamless in-room technology and exceptional Wi-Fi, perhaps the fastest of all the hotels.
The 600 hotel employees are wearing the same uniforms, exceptionally tailored to fit each one individually. Almost half of the faces are familiar, since they have stayed faithful to the Ritz through the years of the metamorphosis.
Dining at The Ritz remains institutional. L’Espadon serves delectable breakfasts and lunches (dinner service will be offered shortly), while evening service is currently being offered at Bar Vendôme which has now got its garden covered by a retractable crystal roof. The pianist still plays his classic repertoire and it was wonderful to see couples dancing slowly on the first evening of the reborn Ritz.
However, despite the cuisine being prepared with the grand precision, the Sybaritic Single was still left hungry for something a little bit more innovative and inspiring. Did he get spoilt by the variety and the audacious mix of flavours at other Parisian palace hotels during the last four years? Perhaps. His favourite pre-closure salad also seemed to have disappeared from the updated menu – yet there had been occasions when the Sybaritic Single would make a few hours’ stop in Paris on his way from America just for a visit to Dior for a new look and to The Ritz for that particular dish.
Both on Monday and Tuesday, the Sybaritic Single took a signature blue hotel umbrella and went for long evening strolls around Place Vendôme. As the Ritz Club and the new Chanel au Ritz Paris spa still remained closed, it gave him a good excuse to stay in bed for longer and start the day with a glass of champagne, which is now Barons de Rothschild. A little card next to the morning tray said: “Please call room service to refresh your champagne bucket”. Such small details, polished to perfection, continue to set this palace apart from the rest of the luxury hotel league. After all, “When in Paris,” once observed Ernest Hemingway, “the only reason not to stay at The Ritz is if you can’t afford it”.