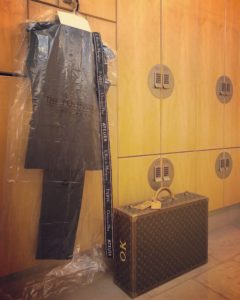 Always on the go, the Sybaritic Single prefers luxury hotels to airport lounges when in transit. Recently in Hong Kong, he chose to escape for a few hours to The Peninsula: a proper detox treatment, a green tea with honey, lemon and ginger, and a Rolls-Royce was all he needed between flights.

At 90 years old, the Grand Dame of The Orient is willing to offer so much more than any of its younger competitors. Nothing is too much or too difficult for its team: be it opening the spa a bit earlier than usual with a perfectly chilled fruit smoothie instantly ready, or steaming the Sybaritic Single’s new look, by Dior, while he is enjoying the hammam before rushing off.

The finest details were considered, including a pair of brand-new Dyson hairdryers which are so quiet, they can never disturb the tranquility of the spa. However, Dyson might be experts in hoovers but they are much less advanced in the art of hairdryers. Their design is sleek but their functionality is just awful – that is why the Sybaritic Single always travels with his own device, powered by an authentic Ferrari engine. Much louder but it gets his hair fixed anywhere in the world.

These few hours at “the finest hotel east of Suez” were an example of an haute couture service tailored for someone not even staying in – and it lasted as far as the passport control desk at the airport. Feathers refreshed, the Sybaritic Single was ready to fly to his next destination.

Transiting in Hong Kong is bliss when there is a luxury hotel which remembers its patrons and their tastes. If only it could also arrange a proper licence to allow sipping Champagne on the backseat of its signature green Rolls-Royces – hopefully, it shall happen well before The Peninsula’s centennial in 2028.