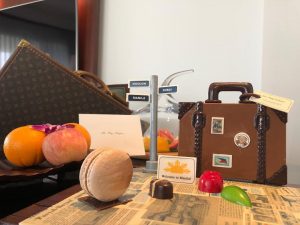 It was early November when the Sybaritic Single took residence at Manila’s most iconic luxury hotel. Through the decades, The Peninsula Manila has become an institution of all things chic in the heart of Makati.
What is great about any Peninsula is that the lobby is always the epicentre of social life (apart from The Peninsula Hong Kong, where the lobby lounge became a victim of its own success with way too many guests – lines of people waiting to be seated is far from luxury). In case of Manila, the lobby lounge is open 24 hours so the Sybaritic Single could enjoy his teas under the iconic “Sunburst” sculpture whenever he wished to see and be seen by Manila’s fashion pack.
What took him by surprise was the Christmas tree lighting ceremony that happened as early as on 8 November 2019. The concierge and reception desk were turned into giant gingerbread houses, the heavily decorated 14-metre tall Christmas tree was installed and musicians from the Manila Symphony Junior Orchestra serenaded as hundreds of guests celebrated the very early arrival of the festive season.
The Sybaritic Single observed the jolly crowd as he sipped pink Deutz bubbles from the nearby Salon de Ning and admired the bustling life around. This luxury hotel managed to bring together the best of Manila’s social life back in 1976, and until today keeps it all under one luxury roof – perhaps, at the cost of a not very attentive service and a pre-plated feel to some of the dishes – but yes, what a great success that lobby lounge is!