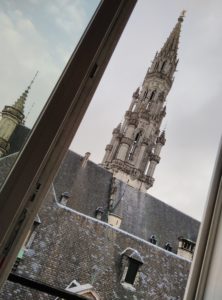 Room with a view

Recently, the Sybaritic Single’s travels took him to Brussels for a night. Naturally, he chose to do so in the finest luxury hotel and found himself on rue de l’Amigo, heading for Hotel Amigo.

As he stepped on the lobby floor paved with cobblestones dating back to 620, he expected a grand sense of arrival. However, the welcome could not be more formal – as if he was checking into a luxury prison which the building indeed was back in 1522, before being turned into a hotel in 1957. The top-floor room boasted views of the City Hall and the Sybaritic Single enjoyed the sounds of bells flowing into his temporary home. Apart from that, the space felt less than inspiring and also quite dated – especially the large desk telephone which seemed time-warped straight from the 1980s.
Later that evening, the Sybaritic Single descended to the lounge to enjoy something light before sleeping. The Champagne was perfectly chilled, however neither caviar, oysters, nor any Belgian gourmet fare were featured on the menu to complement it. Left with little choice, he struggled to choose between a Niçoise and a Caesar (he wanted the leaves from the Caesar and the tuna from the Niçoise), so he asked for both.
“The portions are large. You will not finish two so do choose one”, insisted the waiter who seemed slightly annoyed with the Sybaritic Single who happened to be the last guest in the sleepy lounge that night. The Caesar was good yet totally unmemorable.
Having a box of Pierre Hermé macarons with white truffle and Petrossian caviar at hand, the Sybaritic Single decided to skip breakfast the following morning and felt happy to be on the road and in the skies again.
The hotel describes itself as a place where “historical prestige meets contemporary elegance”, which leaves the Sybaritic Single slightly disoriented as he barely felt any prestige or discovered any elegance. Could this be the right time for more luxury hoteliers to establish their presence in the forgotten European capital?