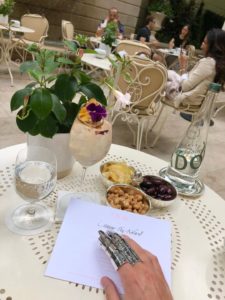 Paris Fashion Week came round fast this summer. Or at least it seemed so to the Sybaritic Single, ‎who had been “beyond busy” hopping from one luxury hotel to another. His schedule allowed ‎him to fly to Paris only for a day this time, just to attend his favourite Dior show.‎
As much as he adores Hôtel Plaza Athénée which is institutional during the fashion week, a mere 24 hours in France meant that he had to ‎focus on one arrondissement, with Ritz Paris being at the heart of it. The other two happening places were within walking distance: Place de la Madeleine and Hôtel ‎Costes.‎
Occupying a central table in Bar ‎Vendôme is a must during the fashion week as this is where everyone who is anyone ‎normally is during the day. Its new refreshing, on-trend cocktail menu impressed the Sybaritic Single with its style and precision. The sublime ‘Délice à la rhubarbe’ mixed by Andy Soto Bustos became his new favourite.
A bit of caviar is always on the menu, and a table at Caviar Kaspia in Madeleine is the place to meet ‎Olivier Rousteing enjoying his portion with baked potato and sour cream (the Sybaritic Single prefers his own au naturel, without potato or condiments). The crowd there is always great, one ‎can spend the evening going from one table to another, talking to the fashion’s great and good.‎
The darkened corners of Hôtel Costes, closer to 2 AM, is another fuzzy fashion pack hangout. ‎Having downed copious amounts of rosé Champagne at the so-well-planned Dior after-party, ‎the Sybaritic Single enjoyed a modest pot of mint tea in the hotel’s garden, served by a heavily tattooed waiter wearing a skimpy outfit. As the moon was shining bright high above Rue Saint-Honoré, he enjoyed observing the heavily perfumed place that always looks more like a luxury brothel than a luxury hotel.‎ Darling.