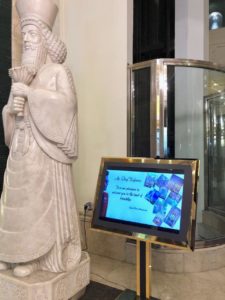 The Sybaritic Single enjoyed the grand final flûte of superbly chilled Dom Pérignon 2009 with a quartert of raspberries as the flight ‎commenced its descent, arriving at Tehran Imam Khomeini International Airport in a few minutes. The following two days promised to be exciting ‎yet as dry as Iran’s Lut desert, the hottest place on earth.

But once he reached the luxury Espinas Persian Gulf hotel well past midnight, the protocol could blow away even the most seasoned traveller: the moment the door of his car opened, an impressive welcome committee ‎greeted him by name (clearly rehearsed and pronounced correctly), his photograph was displayed on screens in the lobby and the pianist ‎proudly performed Russia’s anthem – and he did so every time the Sybaritic Single would walk through the ‎lobby throughout his stay, day or night. The next two days were all about Persian hospitality in its most genuine form: nothing was too ‎much to ask for and whenever something had not been considered it was quickly arranged effortlessly. ‎

Naturally, saffron tea and beluga caviar became the staples of the Sybaritic Single’s diet in absence of Champagne and raspberries. One ‎morning he arrived late for breakfast. The restaurant immediately reopened and the ‎entire buffet was fully restocked. Not a single eyebrow was raised – just a bouquet of fresh flowers was gracefully placed on his table. Another thoughtful convenience was keeping the spa open until very late ‎in the evening so that the Sybaritic Single could enjoy a massage just before going to sleep.‎He also had a chance to ascend to the top floor of his hotel’s sister property, Espinas Palace (currently ‎Tehran’s most luxurious hotel and the only one in the country to offer butler service, though located slightly away from the city centre), for a private preview of the ‎new iconic Sky Lounge which will, among everything else, feature the city’s highest caviar bar ‎and even a flying hippopotamus as its centrepiece, created by Mohsen Gholami in 2016 as part of his “Holy Zoo” collection. Curiously, the hotel could also easily rival the ‎Baccarat Hotel & Residences in New York when it came to the number of Baccarat chandeliers illuminating its interiors – ‎what a surprise! Equally impressive was that it could challenge Carnegie Hall when it came to the size of its in-house theatre. ‎Starting this week and for the next 60 days, Victor Hugo’s Les Misérables will be performed ‎on its stage, to 2,700 every night – and what a massive and world-class production that will be!48 hours in Tehran flew by and the Sybaritic Single was enjoying some more caviar at the ‎airport lounge. Suddenly, he realised that he had forgotten to empty his safe box before leaving ‎the hotel. With just over an hour to departure, the rang the hotel and explained the situation. What happened over the next hour was both a miracle and an example of a superbly -orchestrated service: the hotel opened the safe, packed and sealed its contents (most importantly, a very rare diamond-encrusted Vertu mobile phone), sent their fastest chauffeur to the ‎airport, arranged for the package to be cleared through two very strict security checkpoints as well as ‎immigration, and to be hand-delivered to the gate. Of course, the Sybaritic Single had to pull a few ‎strings to delay the departure of a full Boeing-777 by a good 25 minutes in order to be reunited with his phone. Yet the moment the flight eventually took-off, he could ‎once again celebrate with Champagne and a saffron rock candy. He immediately began planning his return to Tehran’s unexpected ‎world of oh-so-luxury hotels.‎