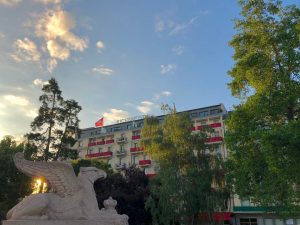 Childhood memories are the strongest, the Sybaritic Single agrees, and when a memory is a luxury hotel it is twice as strong. That’s how he ended up at the 144-years-young Le Richemond, the iconic luxury establishment on Lake Geneva.
The last time he stayed there in the 1990s, the hotel was still managed by Rocco Forte. Then Dorchester Collection took over, before the hotel became independent and a member of Preferred Hotels & Resorts in late 2017.
A few things have evolved. The suites are airy yet still a bit sterile, just like the Sybaritic Single remembered them. However, they offer exceptional views of Jet d’Eau to the left and Brunswick Gardens below, where the the teenage Sybaritic Single used to enjoy his favourite Mövenpick ice-creams, before switching to Champagne years later.
The signature red colour of Le Richemond called for a little revolution this month: for the first time, its signature Le Jardin restaurant, acclaimed 16/20 by Gault & Millau while waiting for Michelin stars, will remain open seven days a week. While common elsewhere in the civilised and even less-than-civilised world, it is a new height of luxury and convenience for Geneva which breaks the Swiss tradition of keeping all doors firmly shut on Sundays. This must be the homage to Adolphe-Rodolphe Armleder, founder of the Riche-Mont Pension back in 1875, who famously made his staff work without holidays, nor days off, 15 to 18 hours per day. Today, the restaurant also puts a stronger and very genuine emphasis on sourcing fresh produce from its own gardens a few miles away and discovering less known Swiss wines.
An impromptu cameo appearance at Le Richemond was definitely not enough, the Sybaritic Single concluded as he was sipping Champagne and picking fresh raspberries from the mille-feuille perfected by Sébastien Quazzola, pastry chef of 2019. He was also able to download the latest issue of Tatler on his device wirelessly and in a matter of seconds – the Internet is fast and free, unlike being slow and priced USD 36 a few years ago. With the luxury competition intensified on the shores of Lac Leman, this Genevan palace invests into exceptional service and thoughtful details – and wins.