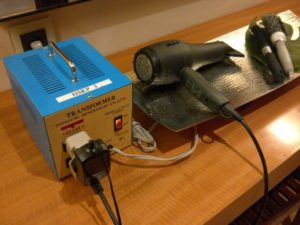 Necessities of a travelling life

The Sybaritic Single is particularly obsessed with his profile as he travels from one luxury hotel to another. To him, hair plays a very important role. Actually not only to him: Anna, Donatella (above), Karl, Yohji – all of them remain loyal to their particular hair styles which have become their style signatures. Yet, hair often gets affected due to dry aircraft cabin air, humid climates, frost and heat which change rapidly as we move from one time zone to another.

Many hotels boast advanced IT infrastructure, better ones even got high-speed Wi-Fi access sorted while the best offer wireless connectivity even inside elevators as well as room service apps – the height of convenience. However, providing a decent hair dryer still remains a challenge for most in 2016. The Sybaritic Single detests wall-mounted blow dryers or small amateur devices in cotton bags. What can one dry with them and how long would it take? Yet, there is no room for a style mistake no matter whether one happens to be in New York for dinner, in Tokyo for a tea, or even up in the air. Once upon a time, the Sybaritic Single even caused an emergency somewhere above Black Sea as he tried to plug in his own hair dryer onboard an aircraft.
Naturally, Parisian palace hotels in the golden triangle were the first to upgrade their equipment and offer salon-grade hair dryers as powerful and sophisticated as the Sybaritic Single’s own device. Their well-heeled clientele walks out perfectly coiffeured. As for the rest of the world – hair dryers remain one of the biggest challenges, and the Sybaritic Single continues packing his own equipment only asking hotels in the Americas to provide a voltage converter in the room. Better hotels know the difference between 110V and 220V while less detail-oriented establishments still confuse a proper voltage converter with a simple travel adaptor despite their international reputation.
Recently in Miami, the entire hotel was aware of the Sybaritic Single’s hair dryer crisis, which was promptly resolved, courtesy of the knowledgable engineering team. After all, luxury hotels are also about thoughtful details and instant response.