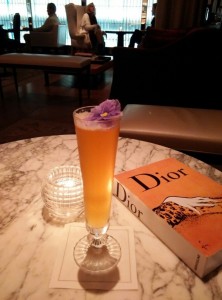 Champagne cocktails come in many colours

Last week, as the Sybaritic Single was orbiting around Earth in 56 hours, he found himself spending a night at New York’s newest luxury hotel. Impressed by the sparkle of the crystal skyscraper, he enjoyed the hotel’s fiery personality concealed behind an ice-cold façade.

Day and night, the lobby salon was the true soul of the new epicentre of luxury off the Fifth Avenue. The Russian heart of the Sybaritic Single beat with excitement as caviar sliders arrived topped with gold leaf foil. As the evening took full reign, Champagne cocktails followed, each of them matching the colours of the Dior albums scattered thoughtfully around the candle-lit lounge. Closer to midnight, the Sybaritic Single ascended to his chamber at the hotel’s top floor in hopes to enjoy some of the Fauchon minibar he had so looked forward to – he therefore felt just slightly disappointed to discover a now all-Ladurée, all-sweet selection.

It was 06.15 the next morning when the traveller woke up for his swim. At 06.28, he pressed the ‘Champagne’ button on the hotel’s telephone – the button became his favourite novelty at the hotel.

‘Just one glass?’ inquired the lady at the other end. A few moments later, Ruinart Blanc de Blancs was served in golden-hue crystal.

As the morning light filled the salon, which now doubled as the breakfast venue, the Sybaritic Single enjoyed more Champagne, this time from a cobalt flute. He did think that perhaps the à la carte cheese selection was more reminiscent of the recent Russian sanctions than of the great French gastronomic heritage, but raspberry jam was a nice touch in lieu of fresh berries.

Shortly after, the Sybaritic Single was already on his way to JFK, ready to cross another ocean. Reflecting on his night, he agreed that while this luxury hotel’s comfort and service were as edgy as the shape of the famed Harcourt 1841 glass, it was definitely great fun and the only place where the Sybaritic Single did not have to carry his own red crystal flute. That meant more space for memories in his wooden trunk.