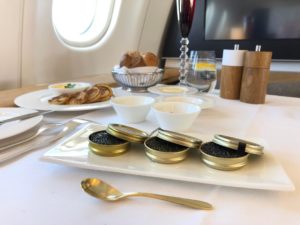 The Sybaritic Single believes that a great location is essential to any luxury hotel, and finding proper hotel rooms inside airline lounges is just so thoughtful and incredibly convenient.
Once a year, SWISS host two weeks of caviar degustation onboard their long-haul fleet and this is the time when the Sybaritic Single prefers this airline over any other which naturally brings him to Zurich.
Of course, he had also adored the world-famous Angels’ Wine Tower at the Radisson Blu opposite the airport, however activists have ensured that the are no more angels performing their dazzling acrobatics within its glass façade – apparently, they have been perceived too sinfully attractive by some.
With even less incentive to spend time land-side, the Sybaritic Single took residence in the St. Moritz room right inside the SWISS First Class Lounge itself, admiring the panoramic view of the airfield and the Swiss Alps in the background. This view makes all the difference when compared to other hotel rooms which happen to be inside first class airline lounges, be it in Al Safwa at Doha or Lufthansa at Frankfurt – neither have ever seen a ray of daylight.
In his opinion, this is the world’s best luxury hotel room that happens to be inside one of the finest lounges. One can stay cozy in bed right until the final call is announced, when a chauffeur-driven limousine would whisk you straight to your flight – the ultimate luxury when it comes to modern flying. The same Mercedes-Benz S-Class also took the Sybaritic Single shopping for La Prairie skincare and Sprüngli sweets to a different part of the airport when he wished so.
The Swiss definitely know how to choose a great bed both in the skies and on the ground – it’s all Hästens. The rest of the interior is natural wood, stone, with bespoke decorative elements and lots of art albums.
À la carte gastronomy with the greatest-ever fondue, eight Mövenpick ice-cream flavours (the Sybaritic Single opted for the healthier rhubarb sorbet), almost a dozen Champagnes and more than 100 Grappas to choose from, as well as the spacious open air rooftop terrace make this lounge almost as wonderful as the Air France Salon La Première at Paris.
Obsessed with impeccable looks, the Sybaritic Single wished to steam his Dior suit and touch-up his hair prior to boarding – and that’s when things became slightly flawed. There was no ironing service or ironing board considered, and there was no adaptor available for his hairdryer. The en-suite glass bathroom was equipped with its own device, however it wasn’t great enough. Eventually, the Sybaritic Single managed to find a creative solution and make his own hairdryer work – otherwise, flights would have to be delayed!
SWISS will have two weeks of white truffle degustation onboard their long-haul fleet later this year – another reason to route via Zurich and enjoy more of the wonderful luxury hotel living with the view of the Alps, right inside the first class lounge.