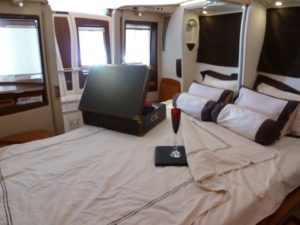 Westin, as on Delta

The Sybaritic Single loves luxury hotel collaborations with airlines. He, who barely eats up at 36,000 ft, does enjoy occasional caviar, champagne and delicious cuisine aboard SWISS flights from Asia, where dishes are masterminded by Florian Trento of The Peninsula Hong Kong. In 2013, he also celebrated the special Air France flight which invited Colin Peter Field, head bartender at the Hemingway Bar of Hôtel Ritz Paris, to mix cocktails on its service to New York.

But while dining at high altitudes is barely healthy, sleeping is essential. The Sybaritic Single detests generic airline beds and reprimands one particular Middle Eastern carrier for using poor laundry and low quality linens. Whenever he uses a simple napkin – forbid a mattress or a duvet – it leaves myriads of tiny white lints which spoil the look of his otherwise flawless Dior suits.
However, there are more airlines which have made considerable progress when it comes to bedding. Air France joined forces with Sofitel and offers exceptionally comfortable and chic beds in the La Première cabin. This is an example when a hotel chain is actually benefitting much more from an airline bed marketing arrangement since the French carrier spares no cost in taking care of its uber-luxury first class product.
The most comfortable bed, surprisingly, was on the Sybaritic Single’s recent flight with Delta from Buenos Aires to Atlanta. While the eponymous US carrier is barely a leader in any other aspect of in-flight luxury, its Westin bedding was by far the most comfortable, ahead of any Middle Eastern or Far Eastern airline in first class. The mattress, duvet and pillows were truly heavenly and afforded hours of uninterrupted sleep.
This is an example of a great luxury hotel in-flight innovation. Would this memory prompt the Sybaritic Single choose Westin for his next hotel stay? Perhaps, if it is an exceptional bed he is after.