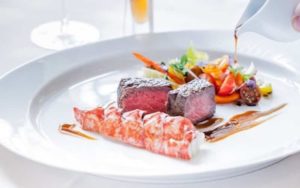 Looking forward to a dish at Rech

The Sybaritic Single is, as you undoubtedly know, a passionate traveller. Last weekend, he decided to jet-set all the way to Hong Kong for dinner at one of his favourite luxury hotels. He arranged flights only a few hours before departure and naïvely hoped that, as always, he would be able to get a table upon arrival. Maître d’hôtel are usually, he finds, kind to solo travellers.

After what seemed merely a few hours later, the Sybaritic Single was already on the HKIA express – the fastest way from the airport to Tsim She Tsui. Full of anticipation, he walked into InterContinental Hong Kong and landed at his usual table in its grand lobby lounge to catch a breath after eight hours of flying. It was the beautiful sunset hour on Friday and many local connoisseurs were indulging in afternoon tea with the finest view of the harbour, toasting the Lunar New Year.
Refreshed by Champagne and his favourite raspberries, the Sybaritic Single continued to SPOON by Alain Ducasse and what a surprise: his found his favourite Hong Kong restaurant closed. Apparently, after 13 years of success it was decided to replace it with Rech, also by Alain Ducasse, which is due to open next week. The new establishment promises to arrive with a stronger focus on seafood, bistro-style, with interiors by Marie Deroudilhe, also in charge of the original Rech in Paris. Long-time Ducasse man Stéphane Gortina will be orchestrating the kitchen.
It certainly feels like five-star hotels also need Michelin star calibre to shine truly in the new era of luxury. Despite the economic climate, Sybaritic Single believes there are even more gourmets who are prepared to cross oceans and continents for a memorable experience. Bearing in mind that both InterContinental Hong Kong and Alain Ducasse accept nothing less than dining par excellence, it looks like the Sybaritic Single will need to return to the city much sooner than expected.