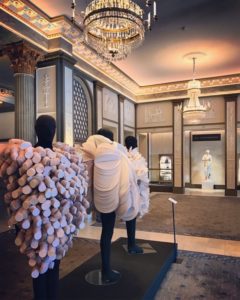 Stockholm Fashion Week at the Grand: paper gowns by Bea Szenfeld, as worn by Björk, and Lady Gaga

The Sybaritic Single fulfilled his promise to fly Singapore Airlines’ newest A350 service, Moscow to Stockholm. However, he proactively lowered his expectations on the ground: the Swedish capital isn’t particularly famous for its luxury hotels. Yet, it turned out to be a very pleasant surprise.

A gleaming Bentley whisked the Sybaritic Single from the airport straight to the Grand Hôtel, situated across the harbour from the immense building of the royal palace. Owned by the Wallenberg family, the recently refurbished grand dame of Stockholm looks as fresh and immaculate as it probably did when Régis Cadier inaugurated it back in 1874. Today, the independent hotel encapsulates the family motto of the Wallenbergs: “Esse, non videri” (“To be, not to be seen”).
For those tired of being chauffeured in Bentleys, the hotel offers a quirky, exceptionally well-branded golf cart, ready to whisk guests around the city centre.
The Sybaritic Single skipped the many types of the famous local herring available for breakfast and chose the more familiar caviar and champagne option instead – though, not with the 1914 vintage of Pol Roger but with one of the other 148 labels kept in the famous cellars of the establishment. Mathias Dahlgren looks after the two-Michelin-starred restaurant at the Grand, world-known for its all-natural seasonal cuisine.
Yet the true crown jewel of this luxury hotel is certainly its Nordic spa. Though the Sybaritic Single skipped buckets with ice-cold water, he can argue that the Grand boasts the world’s finest steam room. Spacious and extremely well-appointed, personal steam control is available for every guest inside it – for those who like it really hot.
As the perpetual traveller was leaving back to the airport, he passed by the hotel’s boutique. The Grand evolved its retail operation into a highly successful business which impresses with its vision of luxury: after all, who would have imagined that the Swedes are so much into champagne-scented candles?