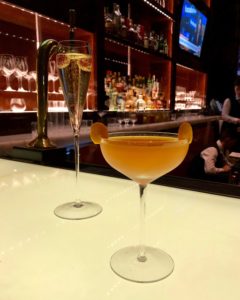 Bahrain is finally catching-up with its glitzy neighbours on the luxury hotel front. As it was the Sybaritic Single’s first-ever visit to Manama, he made a point to see all three of its luxury flagships in one weekend – and that included a well-established Ritz-Carlton, a relatively new Four Seasons and the latest Jumeirah.

The Ritz-Carlton Bahrain remains a very predictable resort despite the recent makeover of a few areas, while the neighbouring brand-new Jumeirah suffers from epic teething problems (reminder to any good general manager: never agree to open a hotel with half the rooms, disoriented frontline employees and one lobby lounge which triples as an all-day dining and the only bar). While the inside of the new palace by the sea is all-white, its entire exterior, front and back, is richly illuminated in ballroom-fuchsia. Similar to quinoa which is now found in almost every salad, onboard any airline, that particular shade of pink is so overused that it most certainly fails to impress.The Sybaritic Single spotted the same colour at the Four Seasons Bahrain Bay – when he was served the eccentric Hello Kitty cocktail at the Blue Moon Lounge by Wolfgang Puck. Thankfully, its refreshing taste redeemed its looks. However, he would never be able to find an excuse for the two plasma TV-screens with CNN and a sports channel which ruined the atmosphere of evening vanity at the luxury hotel. Another hint to a good general manager: 2-in-1 rarely works. The city’s most elegant sky lounge and a casual sports bar should neither be shaken nor stirred. See some Four Seasons flowers, above.

As the Sybaritic Single boarded the return flight, he promised himself to come back to Manama later in 2018 – to discover something new.