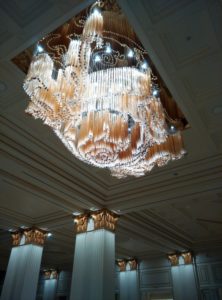 Looking up at a Palazzo Versace ceiling

Although the Sybaritic Single and the gal always stay in touch, it is seldom when they get a chance to spend time together. Sometimes the Sybaritic Single gets a preview of the gal’s sophisticated itinerary and manages to jet-set into a luxury hotel next door to catch her for dinner or just a flûte of Champagne.

Once upon a time, the Sybaritic Single flew all the way to Moscow to invite the gal to his favourite restaurant there. They arrived in a limousine, however once the dinner was over the Sybaritc Single insisted on showing the gal a bit of Moscow metro. ‘The gal does not do subways’, he was warned by an old colleague, but that did not, however, stop the adventurer from luring the gal deep underground at midnight and whisking her straight back to Four Seasons Moscow. After all, who else would dare to take the glamorous gal to a subway?

Last month, the Sybaritic Single decided against taking chances of public transportation and play safe. A gleaming limousine it was to take them to a networking party, admirably hosted by Ecole hôtelière de Lausanne EHL at Dubai’s newest fashion hotel – the one infamous for years of delays and the most unimaginable labyrinth of roads leading to it (see two photos, above and left). It seems so close yet it is so far.

‘I have no idea where we are…’, said the gal looking at the evening skyline in the distance as they were approaching the hotel. Apparently, neither did the driver. A missed turn, a brave reverse on a one-lane one-way road, and straight into a police patrol car.

‘That must be a hotelier’s worst nightmare’, thought the Sybaritic Single as he was watching the driver standing outside and trying to explain the dramatic manoeuvre to the police, and observing the gal’s reaction at the back seat. Her face was illuminated by the flashing lights of the patrol. Her initial panic gave way to a plausible desire to go out and speak to the authorities herself in order to save the poor chauffeur.

Thankfully, it only took moments for the driver – a born diplomat – to settle the matter with the police and bring the couple to their destination in grand style. But Sybaritic Single is now running out of transportation options for the next rendezvous. Perhaps he should look for a luxury hotel with a helicopter landing pad.