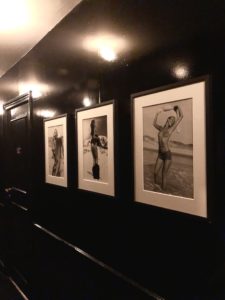 Curious by nature, the Sybaritic Single followed the provocative advice of Victoire de Castellane, Creative Director of Dior Joaillerie, to discover Hôtel Amour, located in South Pigalle, best known for being the burgeoning red-light district of Paris. It was a seldom occasion for him to step out of the universe of luxury hotels and set foot in a former brothel, let alone spend a night in one. Interestingly, this boutique hotel is the place to see with its always-packed restaurant opening to an exotic garden and 24 rooms above. Owned by Theirry Costes, it mirrors the commercial model and social success of Hôtel Costes.

None of the thin-walled rooms are equipped with a TV, air conditioning, a safe box or even a simple telephone – so no room service or wake-up calls. Designed by Swedish-born, Paris-raised graffiti artist and entrepreneur Andre Saraiva, known for the Le Baron, every room is different and filled with erotic artworks, albums and 1950s interior gems compiled from auctions and antique fairs worldwide. Some of the rooms have been curated by artists such as Pierre Le-Tan, who transformed his room in to a mellow green boudoir, decorated with intricate and ornate graffiti across all four walls. Sophie Calle lavished a room with a host of photography, while Alexandre de Betak decorated the black-walled bedroom with a swarm of mirrored disco balls.

The Sybaritic Single enjoyed lots of fun discovering the love-inspired photography adorning every wall of the hotel and sipping the hotel’s own label of Champagne at the bar while watching the most eccentric clientele. He did not have a chance to taste the cuisine as the restaurant remained packed and buzzing at all times. Thankfully, the Blanc de Blancs was chilled and aplenty – and service? Arrogantly caring, as one would expect in a former brothel.

Eventually, the elegantly high Sybaritic Single decided to spend a few hours in one of the rooms upstairs which turned out to be barely more expensive than a few glasses of Champagne. A quick message to the Ritz to reconfirm the limousine for eight o’clock the next morning and he fell asleep at this not-so-luxury yet oh-so-risqué hotel.