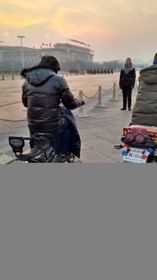 For the first time, he celebrated New Year’s Eve 2014-2015 in total solitude up in the air, constructing La Pyramide made of Champagne flutes aboard a Singapore Airlines A380 bound for Beijing. Upon arrival, he found himself in a signature Peninsula green Rolls-Royce making his way to one of China’s premiere luxury hotels.

Conveniently located in Wangfujing a few blocks away from the Forbidden City, the hotel also invited guests to explore the Chinese capital in a more traditional and fun way – on a bicycle. This instantly became the highlight of the Sybaritic Single’s time there. The Rolls-Royce was dismissed back to the garage while the perpetual traveller borrowed a city map from the concierge and, dressed top to toe in Dior, cycled his way towards Tiananmen Square. What at first seemed to be a caprice, became his favourite pastime.

Every evening, the Sybaritic Single would borrow that bike and, flashing his red soles, go for a long ride around the architectural stature of the Forbidden City or to the Temple of Heaven grounds and back. This proved to be a great memory and also a much more exciting workout which afforded to be enjoyed without wearing any special sports gear.

At last sighting, the Sybaritic Single was back in Beijing, enjoying history, art and Champagne mojitos while in residence at another luxury hotel, as he prepared to depart for Pyongyang – since when he has not been seen (this is surely a case of ‘no news is good news’, of course). In search of a priceless memoir, the Sybaritic Single ventured as unusual as North Korea to toast, crystal red flute in hand, another year while admiring the Tower of the Juche Idea. For the first time. Wait for his next report.