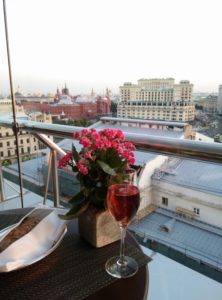 The Sybaritic Single adores luxury hotel rooftops. A couple of years ago, he secretly accessed the rooftop of the Westin Palace Hotel in Madrid (above), only to be able to sip Champagne overlooking the city in absolute solitude – but that is a story for another day.

Last week, our adventurous traveller found himself in Moscow, the city where summers are either too good and burning hot or too bad and pouring wet. Fortunately, it was the former and the setting was perfect to ascend to the very highest levels of the city’s premier establishments.

The Ritz-Carlton Moscow is definitely the trendsetter among Moscow’s rooftops. Its O2 Lounge has recently doubled in space and continues to offer the most picturesque vista of another trendsetter this season – the Kremlin – as well as the finest selection of Champagnes, Russian caviar and Peruvian tapas. The latest refurbishment made the décor slightly simplified, practical and therefore more commercial. Sadly, the portable mobile phone chargers which the Sybaritic Single found so handy last year, proved to be too much of a hassle to deal with for the staff, so the O2 Lounge decided to do away with them. Even after a couple of glasses, the mindful traveller did not take a chance to leave his diamond-studded phone charging out of his sight.

The last drop, quite literally, was the umbrella above his table which happened to be equipped with a hidden water sprinkler. Switching on every few minutes, it was designed to cool down the guests, even if against their will. Once it attempted to moisturise the Sybaritic Single’s hair for the third time, he was quick to get up and hurry towards his next Moscow summer destination – the Conservatory lounge crowning Ararat Park Hyatt Moscow, just two blocks away from the Ritz-Carlton and slightly further from the Kremlin.

Located opposite TsUM, Moscow’s leading department store, Ararat Park Hyatt Moscow’s rooftop lounge, the Conservatory, is a fashionable after-shopping magnet for many. Unlike its main competitor, the Conservatory remained unchanged for a number of years and its team continues to perform a carefully orchestrated symphony of traditional favourites and impeccable service. Less innovative but more efficient is a tested formula which works – and the hardworking “Salieri of Ararat Park Hyatt” seems to attract more guests than the creative “Mozart of the Ritz-Carlton” this season.

World-wide, the Sybaritic Single’s favourite rooftops are the Flair at The Ritz-Carlton Shanghai (China’s highest rooftop bar), Salon de Ning with its two rooftop terraces at The Peninsula New York, and L’Oiseau Blanc with its secret rooftop garden at The Peninsula Paris – just because it is so chic to enjoy an al fresco rooftop at a luxury hotel in the middle of summer. And when there is no provision for a proper rooftop spot – look for the fire stairs…