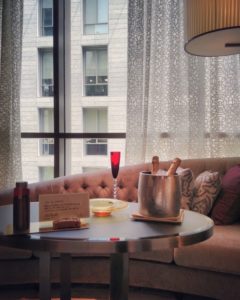 And the flute goes too

The Sybaritic Single appreciates ergonomically-designed luxury hotels. He remembers staying at certain suites which were spacious yet so wasteful when it came to the actual use of space. Others had furniture that looked impressive yet was so uncomfortable and sometimes even traumatic.

On his way to the airport earlier this week, he decided to spend a night at the newest Four Seasons addition in Dubai. Four Seasons Hotel Dubai International Financial Centre, usually known as IFC, has already, quickly, become known as an example of an extremely well-designed urban hotel. Several years ago, one famous luxury hotel company refused to consider this property for its own portfolio as it found its rooms (from 34 sq.m.) too small for the city that is known for everything biggest and tallest.

The Four Seasons team proved to be more visionary. It collaborated with Adam Tihany, known for his boutique designs, and achieved spectacular results. The rooms are still petite, however they boast an extremely efficient layout where everything is considered, with most corners rounded. Their design reminded the Sybaritic Single of the first class cabins onboard Singapore Airlines Boeing fleet. There is nothing bling about this design yet every detail is so well sculptured.

“We wanted the feeling of an inclusive exclusivity, without the ‘members only’ attitude. It is a hotel for people who don’t need to show off,” says Adam Tihany of the atmosphere he has created.

Coupled with a great location in the heart of the bustling financial centre, next to the most fashionable restaurants and nightspots, one can barely imagine a more convenient option for a sophisticated business traveller. The Sybaritic Single also appreciated having a professional salon-grade hairdryer and he adored the glass-walled rooftop swimming pool with a whirlpool bath in the corner – there is nothing better than a good swim prior to a long-haul flight.

Once the mediocre bathroom amenities and the less-than-inspiring dining are upgraded, this establishment might be crowned as Dubai’s finest city luxury hotel.