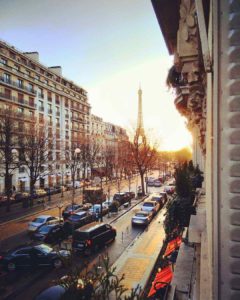 The Sybaritic Single spent this last weekend at one of his favourite luxury hotels anywhere – he was at Hôtel Plaza Athénée in Paris, enjoying the finest of the fashion week between the shows at the Grand Palais and dancing at the Maxim’s.While he is particular about flying in his favourite seat, 1A on most airlines, he is less keen on staying in exactly the same room every time he returns to any luxury hotel. However, this time at the Plaza Athénée, he again found himself spending three days in room 111, where he had stayed before, and before that too. The room commands a picturesque view of Avenue Montaigne and a grand entrance – but what about the memories? Does the Sybaritic Single really want to be reminded of all the things linked to staying in that particular room before?He appreciated Alain Ducasse for breakfast (above), Institut Dior in the afternoon and the flowing Dom Pérignon at night, yet he almost dreaded returning to room 111 to sleep. The shadows, the phanotms, the memories. Staying in exactly the same room might be a good idea for returning honeymooners but less so for those who had once endured a romantic fiasco in those walls, where every pillow was a silent witness.Should luxury hotels always assign the same room to their patrons or should they offer the liberty of choice? The Sybaritic Single contemplates and believes that at this particular luxury establishment he would rather stay elsewhere than in room 111 ever again – despite his immense love for this palace hotel.