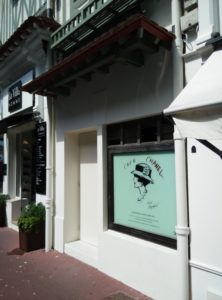 11, Rue Lucien Barrière. A few would remember that this was the address of the first Chanel boutique, which mademoiselle opened in 1913 in Deauville (above). Even fewer would know that it was part of a luxury hotel. In 2013, Karl Lagerfeld immortalised both the boutique and the hotel in a short film devoted to Coco.

Thanks to Karl, the Sybaritic Single decided to choose Le Normandy as his residence in Deauville earlier this week. Very often luxury hotels neglect the retail side of business, offering uninspiring retail lines or, even worse, renting out their prime foyer space to third-party tenants.

The Dorchester Collection and The Peninsula are better examples of well-thought hotel retail concepts, both in their properties and online. The Sybaritic Single always remember to pick-up a bottle of the signature amber scent whenever he stays at Hôtel Plaza Athénée in Paris. Later this season, he will venture to Singapore to get a few boxes of the champagne truffle mooncakes at Raffles. There was a time when he shipped the entire set required to mix Singapore Sling from that hotel. Simultaneously, the table linen was flown in from The Plaza in New York.

There are a few things more disappointing in a hotel lobby than some tiny store selling overpriced tourst tack and supermarket-class chocolates. At Le Normandy, the Sybaritic Single was pleased to find a curious display window with collectable travel memorabilia by Hermès and Louis Vuitton, offered at a vintage gallery nearby. This was both inspiring and complementing for the hotel.

As the perpetual traveller crosses the Atlantic towards his next luxury hotel home, red crystal flûte in hand, he hopes to discover a retail concept which will offer memories rather than commodities.