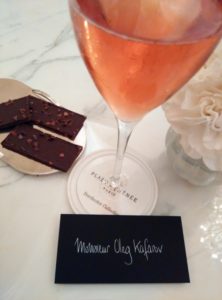 A glass of bubbly at any time

When the Men’s Paris Fashion Week comes with its 50 collection presentations, the Plaza Athénée is the only luxury hotel the Sybaritic Single considers for his stay at the City of Lights. Known as the “Couture Palace” of Paris, the hotel becomes an epicentre of high octane fashion and the outstanding Managing Director, François Delahaye, can be seen early mornings and late evenings around the establishment, in his impeccable style, personally looking after his guests.

On this particular visit, the Sybaritic Single was booked by his minders for a post-flight facial at Institut Dior – one of the very few spas he trusts when it comes to achieving instant results. Recently refurbished, the space is now complete with the latest comforts and the story of the essential French fashion house is subtly narrated through its interiors. The 90-minute treatment was precise, science-based and result-oriented. There were no singing Himalayan bowls, burning incense sticks or any other stage properties that became common at so many of the spas.
Once the facial was over, the Sybaritic Single’s shoulders were put back in place realigning his spine and thus further echoing the importance that Christian Dior placed, as a designer but also as an architect, on posture. This is a signature technique that completes every treatment at the establishment and what a wonderful energising effect it has!
Reminded that time is of the essence by the remote sound of metro trains passing by somewhere deep under the Plaza Athénée, the Sybaritic Single felt better than ever, despite having arrived on an early intercontinental flight, and hurried up the carpeted stairs, through the ever-busy gallery, past the celebrated Dom Pérignon table sleigh installed in the inner yard ice rink (see above), to discover more delights the luxury hotel had prepared for the resident fashionistas.