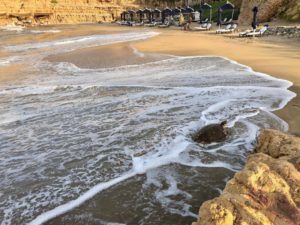 It was late Friday afternoon in Muscat when the Sybaritic Single, having enjoyed a couple of flûtes of Champagne, made his way to the scenic sunset beach of the Shangri-La Al Husn, the most luxurious wing of the Shangri-La Barr Al Jissah Resort & Spa in Muscat.
Admiring the breaking waves, he suddenly noticed a giant turtle making its way from the stormy Gulf of Oman to the shore. Moments later, a few beach attendants appeared and made sure that the “guest” was made most comfortable on the beach. The Sybaritic Single also noticed a few empty nests that had been prepared by the hotel. The turtle quickly made its way to one of them, made a few minor adjustments to the nest before laying eggs right there, in the middle of the luxury hotel beach. Whoever was on the beach, loved this moment of the circle of life.
As the Sybaritic Single was strolling along the beach the next day, he came across several fenced areas which turned out to be other turtle nests. Each of them had a board to explain more about the turtle care project that the luxury hotel has been involved in for almost a decade as well as stated the number of eggs in the nest and a hatching date. A dedicated turtle ranger was also in place to ensure the nests were sheltered from any threats and to raise awareness among guests and the local community about these endangered species. So far this season, which lasts from March to August, there are 56 nests (2,105 hatchlings) belonging to hawksbill turtles and 48 nests (1,912 hatchlings) of green turtles – a wonderful increase of nine nests on 2018.
The Sybaritic Single applauds to the team of this luxury hotel for devoting so much care and attention to this project. This is an example of a great enrichment programme that is perfectly tangible, educational and engaging for guests of all ages, well-connected with the destination, its heritage and nature.