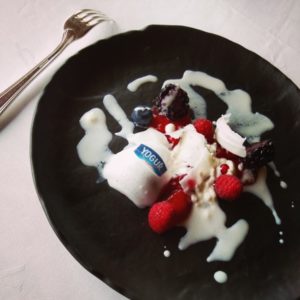 “The Broken Jar of Yoghurt”

The Sybaritic Single appreciates the art of fine dining and often crosses numerous time zones in search of memorable cuisine. With 16 Michelin stars (the world’s highest concentration per square metre, after Kyoto) the Basque Coast is known for its creative chefs. But what about luxury hotels?

In the midst of the recent heat wave, the Sybaritic Single struggled to find a cool refuge in any of San Sebastián’s only two city- centre luxury establishments. While he ensured that his Champagnes remained chilled, he found his attic terrace room at the Hotel de Londres y de Inglaterra unacceptably warm, even at night. The stunning vista of the Bay of Biscay and the intriguing fable of Mata Hari staying right there precisely 101 years ago could barely compensate for the poor air conditioner and bland interiors.

Unwilling to give up his total Dior looks for lighter beachwear, the Sybaritic Single spent afternoons in the Belle Époque salon atmosphere of the recently refurbished Maria Christina Hotel which seemed to be the most civilised daytime option. The hotel’s wonderful gourmet boutique is a true gem for anyone willing to recreate authentic Basque flavours at home – and what a clever idea!

In the mood for a more contemporary ambiance with a stamp of Relais & Châteaux luxury, the Sybaritic Single headed to Akelarre, rising high above the sea on Mount Idelgo, ten minutes away from the centre of San Sebastián. It took five years to complete the boutique dream hotel, envisioned by the celebrated chef Pedro Subijana, and it eventually opened its doors yesterday, July 1st, 2017. Sleek and airy, abundant with stone, wood and natural light, Akelarre is visually the closest to what a European version of a modern ryokan could look like should one be ever exported from Japan. The ambiance of its 22 rooms, all adult-only and some with private pools, is serene perfection for a romantic retreat, while the iconic rooftop terraces are the true jewels of luxury in good weather.

The three Michelin stars of the hotel’s restaurant, however, left the Sybaritic Single wondering. The cuisine remained on the safe and predictable side – surprising, for a supposedly avant-garde three-star establishment that has been in business since 1975. The most visually stunning dessert presentation, entitled “The Broken Jar of Yoghurt” tasted just like yoghurt and fresh berries. Yet it was the service, consistent in its inconsistency, and the less than inspiring wine selection that seemed to fall short of any Michelin standards. His doubts about Akelarre’s Michelin stars presented a bigger puzzle than any bit-block cypher, and so the Sybaritic Single departed for his next luxury hotel, across the border in Biarritz.