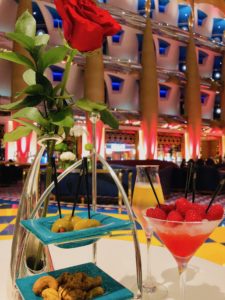 As seen next to Red Square

In absence of caviar, raspberries are the Sybaritic Single’s favourite Champagne hors d’œuvre. Most luxury hotels around the world remember it, however there are still some which try to offer something else.

It was an early grey morning on Red Square when the Sybaritic Single decided to enjoy a flûte of Ruinart Blanc de Blancs looking at the Kremlin in the rain. It took several minutes for the bubbles to arrive and, while waiting, a waitress placed a small plate of glossy castelvetrano olives in front of him, each the size of a small plum. He decided to have one, then another. The olives were delicious and meaty, the finest one can find in all of Italy. The only issue were the pits that the olives still had inside them. Remembering that a couple of olive pits had certain health benefits, the careless Sybaritic Single decided to swallow them.
The next moment he felt an unusual sensation coupled with sharp pain – immediately feeling one of the large pits stuck deep in his throat. He tried to wash it down with Champagne yet could barely swallow and a few moments later found it hard to breathe. Ignoring surprised looks around, the Sybaritic Single rushed to the washroom. 10 minutes later he managed to get the olive pit out, walking triumphantly back to his table and having yet another reason to celebrate the morning and the joy of life. That sip of blanc de blancs, flowing in freely again, could never feel better. A ray of sun kissed the golden domes of the Kremlin cathedrals.
This story reminded the Sybaritic Single of another situation he once had at the Chedi in Muscat, when he broke his tooth while carelessly cracking a pistachio – again, they were served with Champagne in lieu of raspberries. These two stories will remind hoteliers to be ever more careful and thoughtful when choosing snacks for their guests: they have to be as safe and foolproof as possible. Because in the universe of luxury hotels, that’s the way everything should be.