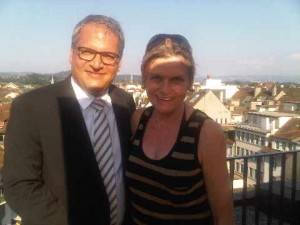 What makes a hotelier of the year?  Yesterday Bilanz, the Swiss business publication, announced that Michael Thomann, boss of Hotel Schweizerhof, Berne, is the country’s top hotelier of 2012 – this means hoteliers working IN Switzerland rather than the a Swiss national somewhere else in this wonderful world.

He was chosen by 120 of his fellow GMs and 80 other travel professionals, which means top travel agents and the like. The gal was there to celebrate his honour. 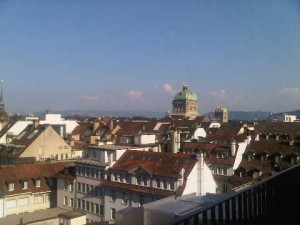 The night before, he was beaming on the seventh floor rooftop of his year-old ‘new’ hotel. An hour before, a helicopter had plonked a bar up there (I had ascended in the elevator with a guy who looked like a climber, carrying masses of ropes – what are you up to, going hiking?  No, for the helicopter, he said).

The rooftop is now, summer-long, an evening bar, serving drinks, tapas and sushi. Fantastic view, of the Swiss Parliament and other strategic buildings. 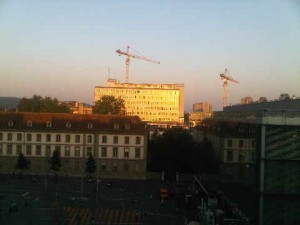 Room 516, one of 99 in this luxury hotel, looks out across Bahnhofplatz at yet more of these glorious buildings (though one does wonder why the Good Burghers of Berne invested in a world of concrete a few decades ago and blended the old with what is honestly among the most ugly masses of urbanization west of the former Iron Curtain – it is not surprising that students and others have tried to cover much of this ghastly stuff with colourful graffiti). 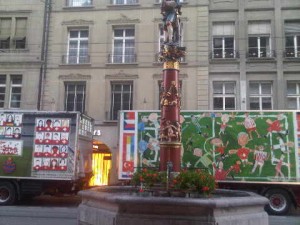 New truck in front of old building, five minutes’ run from the hotel

Never mind. As well as using the hotel’s excellent 24-hour Technogym, take a run north of the hotel.  Head west along Schauplatz and see how some colourful truck art blends with the stately buildings of yesteryear.

For the really fit, then head north to the Parliament building, through its arch and way down to Weithergasse and the Aare river.  Little chalets down there have artistic gardens, with lots of flowers – but no visible gnomes. 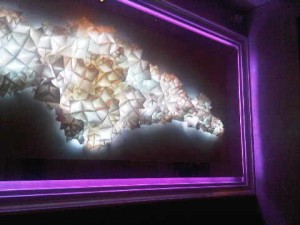 The art-filled hotel has considerable history, going back to 1859.  For many years it was owned by Gauer family – yes, the same Jean-Jacques Gauer, boss of the Lausanne Palace collection.

He is one of the celebrities who contributed to a Golden Book for the hotel’s ceremonial re-opening,  June 24th, 2011 (other VIPs include the Mayor of Berne, Alexander Tschäppät; the President of Fifa, Joseph Blatter; Ursula Andress and Igor Ustinov).

Now it is Qatari-owned and they have spent oodles.  Designer Maria Vafiadis has hung up historic portraits from a sibling hotel, the Royal Savoy in Lausanne, and also put in such wow-todays as an eclectic wall fixture, the far end of the lobby from an inner-lit waist-high alabaster desk where you check in. 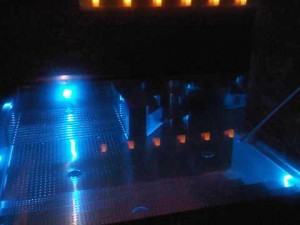 The artistic look of the vitality pool

I would not call the cigar lounge artistic (it is functional, stupid). The adjective can, however, be applied to the lobby’s library, with a good selection of serious books.

This is also a haven for business: as well as lots of meeting space there are two chairman’s-type offices, with antiques, that High Net Worth Individuals use when they come, privately, to see their bankers.

The art in room 516 included a copy of a Paul Klee, a reminder that the brilliant mushroom-topped Zentrum Paul Klee rises out of pasture about ten minutes’ drive from town.

The Renzo Piano-designed structure, funded mostly by the artificial hip replacement magnate Maurice Müller, is truly sensational. As Michael Thomann says, Berne is so well placed you can stay here, and make radial trips to ‘do’ Switzerland.

Down in the lowest level of the hotel, the spa has an artistic vitality pool, with several stations.  The masseuses, who wear clever diagonal-front skirts, do an extremely skilful job finding pressure points if you ask for a Sothys treatment. 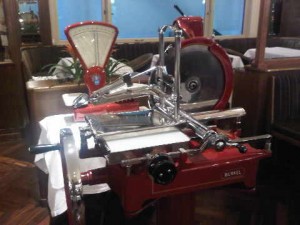 Is this a modern sculpture? No, it is a functional Berkel slicer, in Jack’s

One could call the floor-standing Berkel slicer in Jack’s restaurant something of a sculpture.  This adjacent brasserie is, probably surprisingly to most of its regulars, actually part of the hotel (it is named for Jean-Jacques Gauer’s father).

It has been restored to as-was, with six 12-light chandeliers overhead, and wood-edged booths bearing the names of past aficionados.  How, I wonder, did Bruno Fankhauser, Bruno Faietti, Marco Pascolo, Walter Winkler and Enzo Leonardini all manage to sit where I am now dining? Perhaps they came one by one. 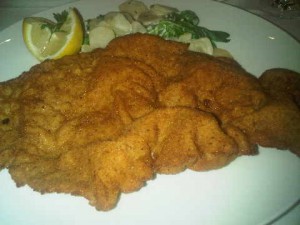 Jack’s justly-famous wienerschnitzel, as wide as the height of an A4 sheet of paper

And the restaurant’s signature dish is sheer artistry… everyone mentions ‘Jack’s wienerschnitzel’ so that is what had to be ordered.   The result is a horizontal sculpture that spreads over a large plate.  I do not have a tape measure with me but I size it by a sheet of A4 paper.

The meat’s width is as high as the paper.  The chef must have taken a bit of Swiss veal (provenance is given on the printed menu) and bashed it and bashed it, and covered it in the lightest-possible batter.

Here it is served with a cold potato salad and lambs’ tongue leaves.  I think back to the great Wienerschnitzels of the InterContinental Vienna, and Lutter & Wegner, ten minutes’ walk from the Adlon Kempinski, Berlin.

This one is one of the superlatives, especially with a small carafe of a local Pinot Noir, a Donatsch 2010 Passion. What a brilliant marketing name for a wine.  After that I climb 125 carpeted stairs back up to the fifth floor, passing old art from Lausanne and modern vitrines holding displays for, say, Tag Heuer, with a photo of ambassador Maria Sharapova.