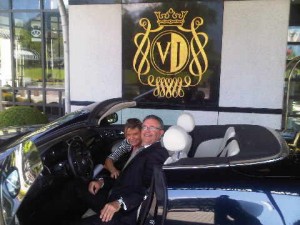 What is Swissness?  This is a question best answered by someone like Stefan Bollhalder, who 31 years ago left the St Gallen area for Asia – and vowed never to return.  But now he is back, in charge of one of Switzerland’s other iconic hotels, Victoria-Jungfrau Grand Hotel & Spa.

Honestly, he says, little has changed (though he is constantly amazed at how many young women smoke).  Swissness to him is honesty and quality, and he is in complete heaven over Swiss wine. 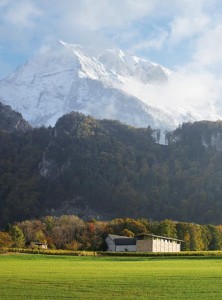 At dinner at his luxury hotel’s Jungfrau Brasserie, for instance, he invites the gal to try a Pinot Noir, Gantenbein 2009 from Grisson, by wine makers Martha and Daniel Gantenbein. It comes in a simple bottle, with blue neck cap, and a blue paper label with Gantenbein seemingly hand-written.

We are dining outside, on the terrace, looking at pedestrians, cyclists, cars and the occasional horse-drawn carriage passing by along Höheweg, 20 yards away.  The paragliders have given up for the day, even though it is still daylight.

In winter, at this all-year Leading Hotel, the restaurant moves inside to a Baroque room that was once an antiques shop. Now, simple wood tables in the open air seem just right for food that embodies Swissness. 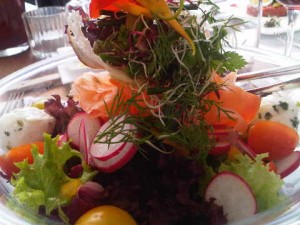 My simple meal is the Brasserie bio salad with Schangnau marinated buffalo mozzarella, followed by a long-time favourite, Creamed sliced veal Zurich style (Kalbsgeschnetzeltes Zürcher Art) with roesti potatoes, which come in a separate dish, on a hot pad.  Simplicity can be remarkably satisfactory. 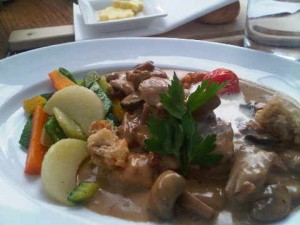 The Swiss also have a penchant for that central-European idiosyncracy of getting a stick, about three feet long, and nearly splitting it in two from one end to the other.  Through this slit you insert, say a newspaper, hold the two sections with a ring and hang the whole thing up by a hook.

This means the reader has to grapple with the long pole balanced across the elegant table, and she will find that she cannot read into the spine, so to speak, so misses much of the valuable content. 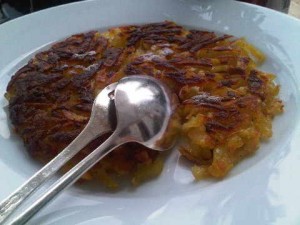 Here, the printed menu is similarly confined, but the wording is all visible, which is a good thing as it is a colourful copy of the Brasserie Journal, edition Summer 2012.  It gives all details of foods available, in English, French and German, and suggests suitable wines – say a Tipsy chocolate cake with cherry ice cream, ideally with an accompanying glass of Pinot Noir One Twenty 2010 Winzerei Strasser Uhweisen.

The menu also recounts the centenary of the William Tell Open-Air Theatre, which this year gives 22 performances of the historic pageant in which 200 actors act a story that even includes W Tell shooting an apple from his son’s head. 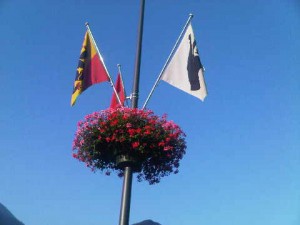 Tradition is very Swiss, and Stefan Bollhalder says he has discovered all kinds of ancient treasures, things like decorated porcelain water bowls and jugs, that he will be putting back into his 212-room luxury hotel to elevate it yet more to palace status.

It has such a fascinating history. In 1856 Eduard Ruchti, then all of 22 years old, bought a pension, which in 1895 was added to an adjacent hotel – the two were joined together, in holy hotel matrimony, in 1899.

Jump forward to WWII and the massive property became headquarters of General Henri Guisan – yes, him whose statue adorns the garden three minutes’ walk along from Ch d’Ouchy hotel, on the shores of Lac Leman.

Jump forward again to 1970 and Emanuel Berger and his wife Rosemarie (sister of Peter Borer, the brilliant operations ideas guy at Peninsula) come into the Victoria-Jungfrau picture.  It was the Bergers who took this fabulous hotel on to its present luxury state, and paired it with hotels in Berne and Lucerne. 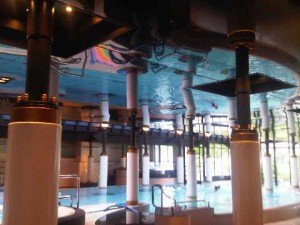 The hotel's stunning indoor pool (with outside vitality pool)

The Swiss are capable of making serious investments when necessary. The fitness facilities here not only attract 500 paid-up outside members but they pull in hotel guests from all over the world.

For those like me, there is a highly-active Lifefitness gym which opens at six, and has a busy programme of curated classes.  For spa addicts, ESPA is complemented by the super-exclusive haven that is Sensai by Kanebo (try its Koishimaru royal silk facials).

For swimmers, the 75-foot adult-only indoor pool is an architectural one-off, and you can head through to the outside vitality pool, great fun in winter when you look around at a 360-degree snow vista. 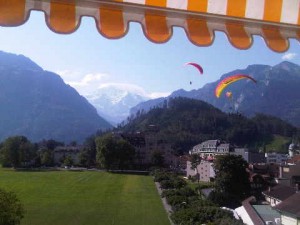 Look out of duplex 404 at paragliders about to land, just opposite

OK parents, do not get angry.  Kids are allowed in the pool for one hour, from 1600, and, anyway, they have their own chalet club immediately behind the hotel.  And, animal lovers, you are not forgotten.

Many of the bedrooms have parquet floors, ideal for Petronella the Pug.  Duplex 404 is one of these areas, completely wood-floored apart from its marble main bathroom and carpeted stair treads.

Downstairs, there is a living room and half bath: up 15 stairs is the bed ‘platform’ and up a further five stairs is the bathroom and walk-in closet big enough for Lady Gaga’s entire wardrobe.

The main walls are somewhat seriously covered in linen with Latin calligraphics. A sense of smile is invoked by looking out through the two big windows – one French, leading to your four foot-deep terrace with seating.

Both windows have brightest buttercup yellow and white awnings. Look through, at paragliders continually landing on the football field-sized lawn in front, and look straight ahead, to mountains and, if you are lucky, the Jungfrau. 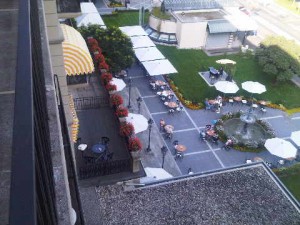 look down, at the Spanish pianist in the hotel's forecourt

Swissness is unique experiences, like going up the Jungfraujoch, celebrating its centenary this year (Swissness can also be incredible rudeness, like four people who removed me, extremely discourteously, when I was writing this on the train – yes, they had a reservation but they could have done it nicely, I guess they were too old, at around 50, to relate to someone working a laptop).

At Victoria-Jungfrau, by contrast, the people could not have been more helpful – a concierge was superlative when the (free) WiFi went down, a city rather than a hotel problem.

Of course for the thousands of tourists who head to Interlaken every year a yodel and a dirndl help.  The former were absent, but some of the female servers at the hotel’s stately breakfast, among candelabra and chandeliers (unlit, at that hour), wore long black dirndls, which reminded me of my own-design rig-out at a Vienna Ball in January 2012.

Interestingly, Stefan Bollhalder himself is redoing lots of staff gear here – he has put evening cocktail lasses, dispensing Laurent-Perrier to guests listing to a Spanish guy playing a grand piano, into perky little hats over patterned waistcoats over white shirts hanging out over cream chinos, great. 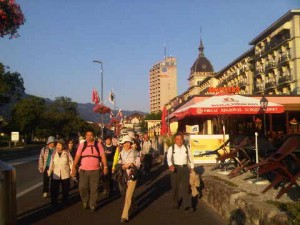 Final touch of Swissness here?  The labelled cheeses, including a whole cow-milk Alisa-Victoria, on the breakfast buffet, with the justly-renowned healthy breads, with all their nuts, and Apicoltura Medina Daniela honeys.

And although the Swiss might be somewhat domestically-oriented, they do look outside.  The breakfast china is German, as are the jams, and the getaway car is Indian owned. And outside, the Japanese continue to flood to Interlaken…