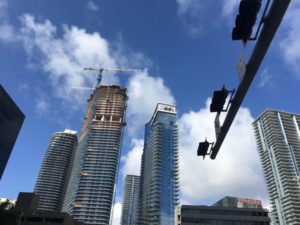 Looking up at EAST (the centre of the highest blocks)

EAST is west of Miami’s Brickell Avenue, and east of I-95, and just south of Miami River and north of 8th Street – yes, this is a luxury hotel at the centre of its own world. Looking at it from Claughton Island, the 40-floor building stands out for its armadillo-protrusion vertical lines and, on top, what looks like greenery. Up there is Miami’s most ‘happening’ rooftop space, Sugar Bar, which buzzes all evening long and often has long wait lines, according to its manager, Michael, who came from another Swire hotel, The Upper House in Hong Kong (of the 450 people working this 352-room hotel, all those I encountered were sensational, by the way). 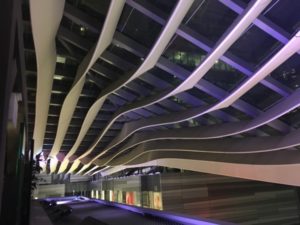 I was shown up to room 2905 by Julien from Réunion, a former professional soccer player with not a spare ounce on his body – apparently I was the first guest he had met who has been to Réunion. Later, at dinner outside at Quinto La Huella, I was served by Shawn, a fabulous northern Californian who was friendly and professional at the same time – he showed me how to make my iPhone work better as a torch: it is very trendy in Miami right now to expect people eating outside to do so in near-darkness. Quinto La Huella is a 359-seat space with inside and outside areas that deliberately evoke a beach restaurant, copying Parador la Huella, the Uruguayan phenomenon that opens only two months a year. 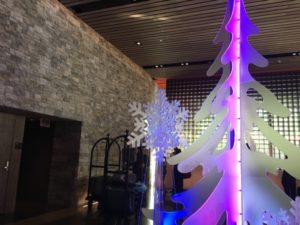 The lobby is highlighted by its Christmas ‘tree’

So we sat outside, looking up at this great architectural concrete canopy, a 140,000 sq ft Climate Ribbon, which apparently absorbed a mere $30 million of the total $1 billion spend on the entire Swire complex that will include offices, residences, and Saks Fifth Avenue and other retail as well as the hotel. Sugar Bar and Quinto La Huella are already absolutely must-visits for locals and I can see why. My beer-battered calamari, with Graffigna Malbec San Juan 2013, were honestly the best in the world, and the grass-fed Uruguay ribeye was sensational too (as were the breakfast offerings, when the $18 continental buffet includes really authentic Greek yoghurt, and Humboldt Fog blue cheese and doorstop sourdough that toasts like a dream). 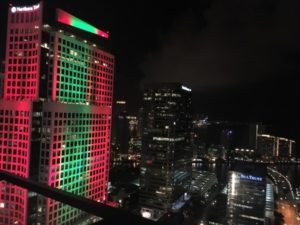 Looking east from EAST, at night

This is an interesting luxury hotel, by architects Arquitectonica with interiors by Clodagh. Apart from the restaurants it is all rather minimalist, with a lobby that is deliberately functional, though the current Christmas tree adds a feeling of life. Corner room 2905 has wood-look ceramic flooring, and a rare splash of colour, bright orange, shines out when you pull open a light wood cupboard that holds the espresso machine. But who needs more colour when you look out, day or night, at this amazing view? I loved waking up to a changing colour show of some of the high-rises around – but despite the spend on architecture and design, my own top marks would go to the eating-and-drinking components, and to those lovely staff members, including my breakfast server, who had his Mohican tightly plaited, both sides of his head and meeting in a little bun at the back. Saves time, he assured me with a smile.  NOW SEE MORE OF MY BEDROOM, BELOW