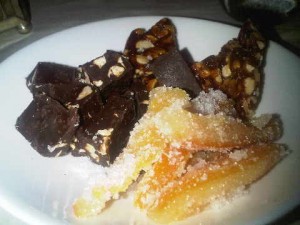 The Italians do love their sweet things.  After turning down dessert and coffee and Averna or other digestifs at dinner you might still be tempted by a tray of sweetmeats.

That is certainly what happens if you are lucky enough to dine at Baretto al Baglioni in Milan, a favourite of Giorgio Armani and Tod’s boss Diego Della Valle and the top fashion pack, as led by Vogue’s legendary Anna Wintour.

Sadly none of those were there when the gal dined, with two gorgeous men, Luca Magni and his rock-addicted son Davide, whose flowing locks should guarantee him a Vogue cover any day now (Ms Wintour, are you listening?). 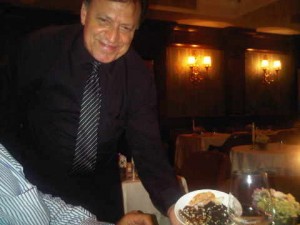 Waiters take your order – but know what regulars want

Baretto was started 30 years ago in via S Andrea by two now-immortal restaurateurs, Vincenzo and Ermanno, and like the Chris Corbin and Jeremy King duo at The Wolseley in London, one of the two is invariably on hand.

It was Ermanno who took our orders, and apparently next time he will offer me, without asking, the exact same menu – and he copes with up to 200 diners a night in the two adjacent, tartan and leather rooms, one smoking and one non-smoking. 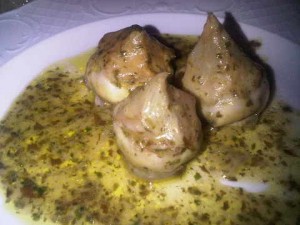 The menu is simple, leather cover with almost a Xeroxed single sheet, folded in two, inside. Artichoke salad, listed just like that, turned out to be a dream.

Of course, this is Italy (everyone in Milan seems to complain that the city burghers think because it has fashion, food and song, no marketing of Milan is necessary).

Davide seemed to be fuelled by half a dozen or so bread rolls but he has been sailing for a week and he is growing fast – he is only 14, by the way.  He starts with a bright yellow risotto milanese, lots of saffron, parmesan on top. 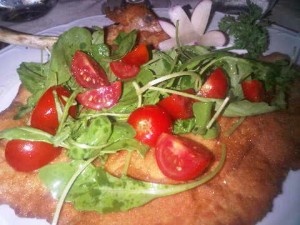 I was fuelled by a glass of the Antinori family’s Tignanello 2008, which garnered 92 points from Wine Spectator (which dared to say it should be drunk until at least 2014).

Give me a a simple life, like veal milanese, a dish I first fell in love with at Nicola’s, surrounded by Italian immigrants, heavy set men and luscious young ladies, on East 84th Street back in New York.  It comes on the bone, topped with tomatoes and rocket/arugula. 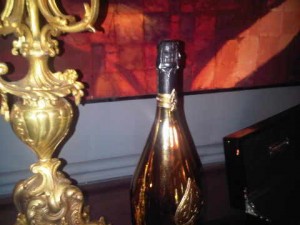 In the bar, golden champagne bottles and a fabric collage

Baretto al Baglioni, to give the restaurant its full name, moved into a space next to a Leading hotel, the characterful Carlton Hotel Baglioni.  To get from restaurant to lobby, you go through a bar that symbolises the unique idiosyncracies of this luxury hotel.

A pair of pink shoes, available from the Amaranto boutique that has somehow slipped in between restaurant and bar, is in a glass vitrine next to several magnums of gold-covered Armand de Brignan Champagne.

Some stand in front of a wall hanging that looks like a portrait: get close and you see it is formed of small squares of cloth. 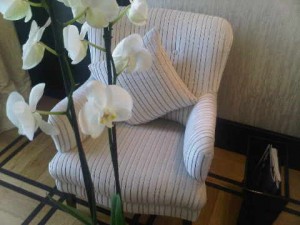 The hotel, fifty years old this year, is having a fabulous spa-of-a-facelift.  A young Milanese designer, Federico Spagnulo, has done wonders. 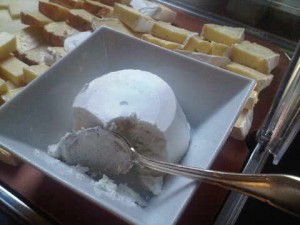 Because in the morning, visitor to Italy’s home of fashion, food and fol-de-rol, you need to try a Milanese breakfast.  You can be quite sure that you will see at least ricotta, if not lots of other cheeses too, on the buffet.

If you must go for American rather than espresso, then you take your chance. And if you want the ‘real’ breads that are the norm just north, in Switzerland, you had honestly better bring them with you. 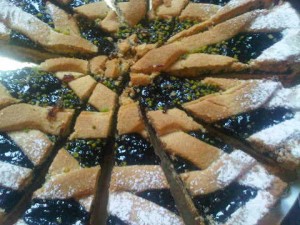 .. and, of course in Italy, a sweet tart

But there are goodies that are more than worth trying.  There may be a selection of savoury quiches, and you will probably also find an ultra-sweet tarte.  Remember, Italians love a sweet ending…